Living on the edge in Kasokoso

by Canary Mugume
in Featured, News

Stone quarrying is one of the booming businesses, particularly for low-income earners to eke a living. In Kasokoso, however, more than 20,000 people from Acholi quarters may soon become beggars, as their only source of survival is soon caving in. The only way to save hundreds is evacuation, but powerful forces have conspired to risk hundreds of lives clinging to the rocks. 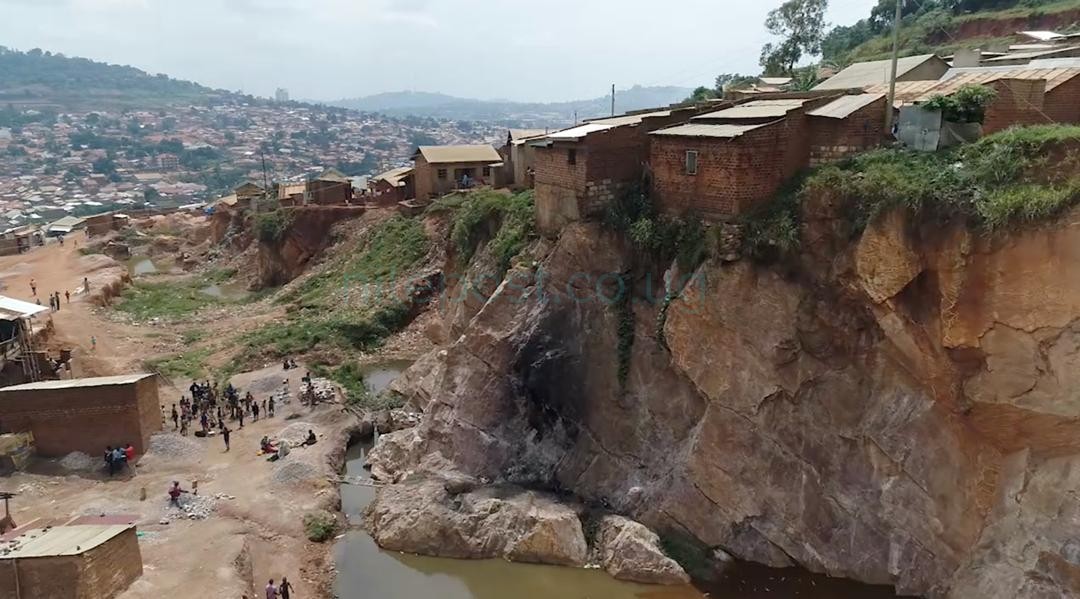 Displaced by the Lord’s Resistance Army insurgency in Northern Uganda, the wandering Acholi ethnic group found a foreign place to call home- Kasokoso. Traumatized by war abuse; rape, cutting of body parts and families displaced, the new settlers only had the rock both as shelter, and an escape from poverty.

On top of a hill, five kilometres away off the Kampala-Jinja highway, the displaced Acholi community created a new home for themselves. No one wanted to stay here but somehow they made Kasokoso habitable. They imported their culture, established livelihoods and hoped they had found a new home. Thirty years later, voices seeking ownership are growing loud and hoarse.

When I walked in, the stench of desperation welcomed me. Survival, unemployment, corrupt livelihoods are commonplace. Easily considered Kampala and Wakiso’s biggest slum estimated to be accommodating close to 200,000 people who are settled on the 292.6 acres of land. The weight of the settlers on the land is immense.

But the Acholi community have a new challenged, they may soon require another home

The rock that handed them settlement and survival, is an accident waiting to happen.

Mining is the main occupation here, and source of survival . The rock that employs them thousands, can no longer stand!

For over 30 years, mining activity has cracked the rock, in its wake, environmental damage.

The stone is nearing collapse, a disaster that could see hundreds buried in debris.

When daylight disappears in the sky, fire is lit on the rock to develop cracks to ease their job. The same rock that is exposed to forces in the night is still the one that hosts hundreds having a pleasant sleep.

When the sun brushes on every doorstep in the morning, it’s a reminder to every household to catch the early worm. Ester Nakisinge, 36 years old and a mother of 8 children survives by crushing stones for sale. A full jerry can of crushed aggregate stones goes for shs.250. She is able to crush 10 jerry cans of stones a day. At end of workday, she has earned 2,500 shillings, hardly enough to feed her children but she perserves.

Just after sunset, Ester retires from the quarry. The task of climbing up the same rock returning home to return to her family of 8 is another biting effort.

“I have to go back home by night, I fear for my children who like to play here in the night,” Esthter Nakisinge explains.

Ester’s trial is not a lone escapade.

Fellow mother Auma Belinda braves the trip as well, “We have problems crossing back home, when you don’t work, the kids won’t go to school.”

Living precariously as they do, there have been minimal efforts to look out for the communal safety of the Kasokoso residents.

“There was an attempt to reorganize the place which flopped because of the challenges the people who pursued that program exploited,” Musa Ecweru tells the Nile Post.

“In Kasokoso I don’t have a problem absolutely, the problem I have is the problem of the economy, ” Kira Municipality MP, Ssemujju Nganda says.

The Ministry of Disaster and Preparedness has for years earmarked plans to relocate the population, but have largely remained on paper.

While the government dithers, locals continue to crush stones. The National Environment Authority continues to monitor Kasokoso but seems helpless to help.

Tony Achidria a senior public relations officer at NEMA says the body has, “Engaged with the leaders of the community right from 2014. But it is true they have accumulated, and now the impact on the environment is being felt.”

Engagements and forceful evictions of the miners from Kasokoso 5 years ago have instead bred more chaos.

Nakisinge and her 8 children retire here after a long day. The low cost housing at only 30,000 shs a month does not permit them a life they desire to live. Nakisinge makes 75000 shillings a month, shs 30,000 of which goes to rent. But the lack of alternative has them accustomed to this life.

The loose edges of this house communicate a message; that one day this family will wake up and the only shelter they have will be no more.

Aruu county MP Odonga Otto argues,“If Uganda government could receive 22,000 Rwandan nationals that were evicted from Tanzania, it is about that time we settle our own nationals.”

The contested land here belongs to the National Housing and Construction Company Limited, which had earlier 5 years ago vowed to develop. However, a visit to their offices did not yield much as the CEO declines to talk to me about the matter.

The silence of stakeholders on the matter, to the residents here; is hypocrisy.

Area MP Ssemujju Nganda is defiant, “I am not afraid that when you demolish Kasokoso I will lose, because I won at all polling station apart from one. I am just sensible, there is no way you are going to make people homeless waving projects of national housing yet you’ve had people in Crested Towers keeping goats until they were driven away.”

The question is what can be done to save more than 200,000 lives of people here with an amicable relocation plan?

Zimbabwe’s white farmers to apply to get their land back

The Zimbabwean government has said that white farmers whose tracts of land were seized between 2000 and 2001 under a...

Man chops off brother’s head in land dispute, hands self to police

Land offices in Wakiso to close for two weeks