KCCA FC’s fairytale story at the group stages of the continent’s biggest club competition, the CAF Champions league ended last night with a 4-3 loss to Al Ahly at the Borg Al Arab Stadium in Alexandria.

KCCA FC boss Mike Mutebi made two changes to the team that started the 1-0 victory over Township Rollers at the Mandela national stadium on the 18th of August.

19-year-old defender Peter Magambo made his continental debut for the Kasasiro boys replacing Hassan Musana on the left of the back three while Gift Abubaker Ali took Muzamir Mutyaba’s place in the center of the pack alongside Sadam Juma and Jackson Nunda. 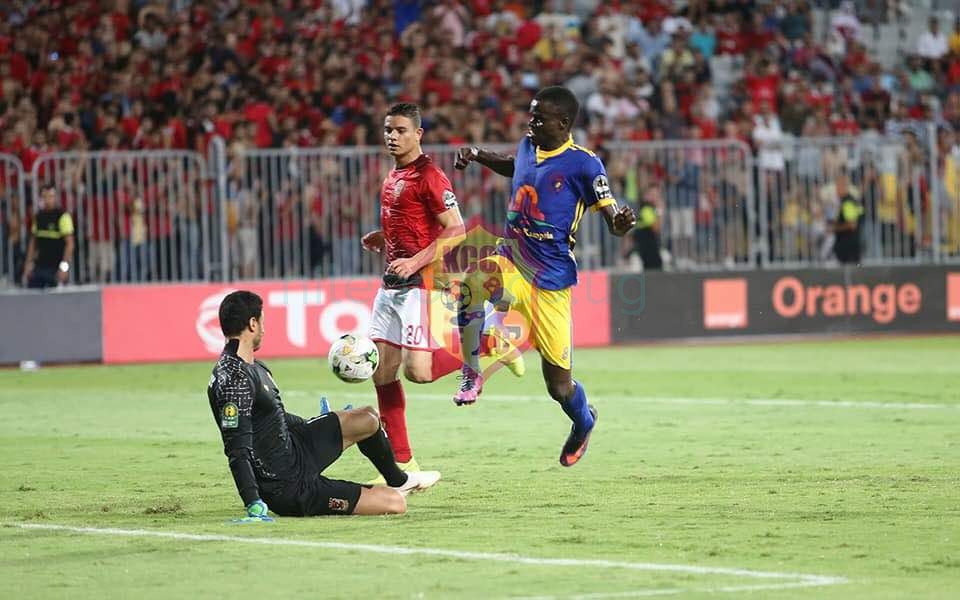 Walid Azuro headed the hosts forward in the 23rd minute before Jackson Nunda pulled KCCA FC level five minutes to the break, heading home from a well calculated Mustafa Kizza cross from the left as the first half ended one all.

Five minutes into the resumption, Ivory Coast international Souleymane Coulibaly grabbed a second for Patrice Carteron’s side after KCCA FC goalkeeper Thomas Ikara and his defenders failed to clear a free kick from the edge of the box.

Al Ahly’s moment of joy did not last. In the 54th minute, debutant Peter Magambo connected well with Mustafa Kizza’s free kick to head KCCA FC level. The sides were not done yet.

Ah Ahly’s number nine Walid Azuro completed his brace in the 62nd minute finishing off a well-built move by the Egyptian Red Devils with an acrobatic header that left goalkeeper Thomas Ikara still.

There was time for Allan Okello to get his first goal on the continent with a left footed shot from outside the box with just eight minutes left on the clock as the game ended 4-3.

In his post-match presser, KCCA FC tactician laid the loss to their opponent’s experience.

“We played against a very good side. We studied them when we played against them in Kampala. The difference was that they are more experienced than us, used the ball very well and utilized the chances they got”

The victory for Al Ahly and Esperance Tunis’ goalless draw against Township Rollers in Botswana on the same day meant that the Red Devils progressed to the next round top of group A with 13 points while Esperance were second with 11 points.

The Ugandan representatives bowed out third on the group A pile with six points, three ahead of rock bottom Township Rollers.

Despite the exit, there will be positives to pick for KCCA FC and more to be proud of for a team that was playing in the group stages of the biggest club football competition on the continent for the very first time.

Uganda’s first ever All-star football match is here. The StarTimes All Star game between Team Dubimax Hasule and Dubimax Kirunda...