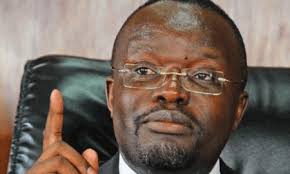 First of I would like to state that I am I am serving as Chairperson of Council of MUBS and the Principal of MUBS, Professor Waswa Balunywa is responsible to council.

On 5th March 2018, I did write on behalf of MUBS council recommending Prof. Balunywa for re-appointment as Principal MUBS and this letter was copied to Prof. Balunywa.

However, I have of late learnt that as per Section 12 of the Pension Act Cap 286, Prof. Waswa Balunywa does not meet the eligibility criteria for re-appointment as a Principal of public tertiary institution since he was born on 3rd December 1955 and is already above the mandatory retirement age of 60.

As a result of this legal requirement, a principal of a public tertiary institution is required to vacate office on attaining the age of sixty years.

I recently applied to serve as Vice Chancellor of Makerere University because many stakeholders wanted me to go back and finish the unfinished business I left behind.

After serious considerations I decided to apply and the rest is history and I am done with serving as Vice Chancellor/Principal of any University/ Tertiary Institution. Whoever is circulating falsehoods against me, time will be the judge.

Now Hon Asuman Kiyingi who served as minister, MP and is a lawyer can put pressure on government using all technics including religion, tribe, blackmail to have Prof. Balunywa re-appointed Principal MUBS even when he does not qualify.

On my part, I had recommended him in a letter dated 5th March 2018 on condition that he met the eligibility criteria that is under the mandate of the appointing authority i.e. the Ministry of Education and Sports/ Education Service Commission.

The author is chairperson of MUBS council.

Makerere University Business School lecturers have criticized the National Resistance Movement manifesto as they announced their sit down strike over...

Makerere to rely on 300,000 alumni to raise shs15bn to rebuild Ivory Tower

U.S concerned over campaign violence ahead of 2021 elections

Museveni has no future to give Ugandans- Bobi Wine

The director of Dawa and spokesperson of the...