by Benedict Ntale
in Tour & Travel

Heavens came-down and glory filled Kisoro highlands! The splendor and grand-design of this piece of the planet gives a glimpse into what heaven could look like. It is indeed breathtaking, picturesque and soul-replenishing. One would nominate it for the Biblical Garden of Eden.

A litany of superlatives cannot suffice to give this place a description that it duly deserves. It is simply magnificent and insanely spectacular! I am talking about Lake Mutanda and the panoramic view this pristine lake commands.

Situated about 20kms north of Kisoro, Lake Mutanda covers an expansive area of about 22sqkms. This placid lake is charmingly decorated by 15 islands that nature intelligibly scattered within its fresh waters. A lush vegetation and shrubs crown the natural beauty of the lake on its respective shores. Sitting on the foothills of the great Virunga Ranges, Lake Mutanda is only drained by River Rutshuru that flows northward to lake Edward along the Albertine Rift.

This serene lake is a haven for various avian, aquatic and semi-aquatic creatures. Avid birdwatchers can look-out for great cormorants, pied kingfishers, grey crowned crested cranes, various species of sunbirds, Ibis and Malachite Kingfishers among others. Other permanent residents include snakes, chameleons, monitor lizards, several frog-species and the African Clawless Otter. This lake once hosted Hippos, records have it that they were last seen in the early 90s.

Taking Chameleon Hill Lodge as a vantage point, one can marvel to the last nerve at the incredible trio-ranges; the volcanoes! The three magical volcanoes are Muhabura 4127m (the guide), Gahinga 3474m (Pile of Stones) and Sabyinyo 3645m (Old Man’s Teeth). It’s a tale of the three magnificent cloud-scrapers; they conquer both the skies and the scenery. They get shy at times and hide under cotton-like layers of clouds and then unveil their radiance when the clouds recede. At times, they vanish in layers of fog and mist, only the patient can see them in full glory.

The blue sky dotted with white clouds, scattered Island of Lake Mutanda and greenery over the hills in unison offer one of the most astonishing views on the planet. 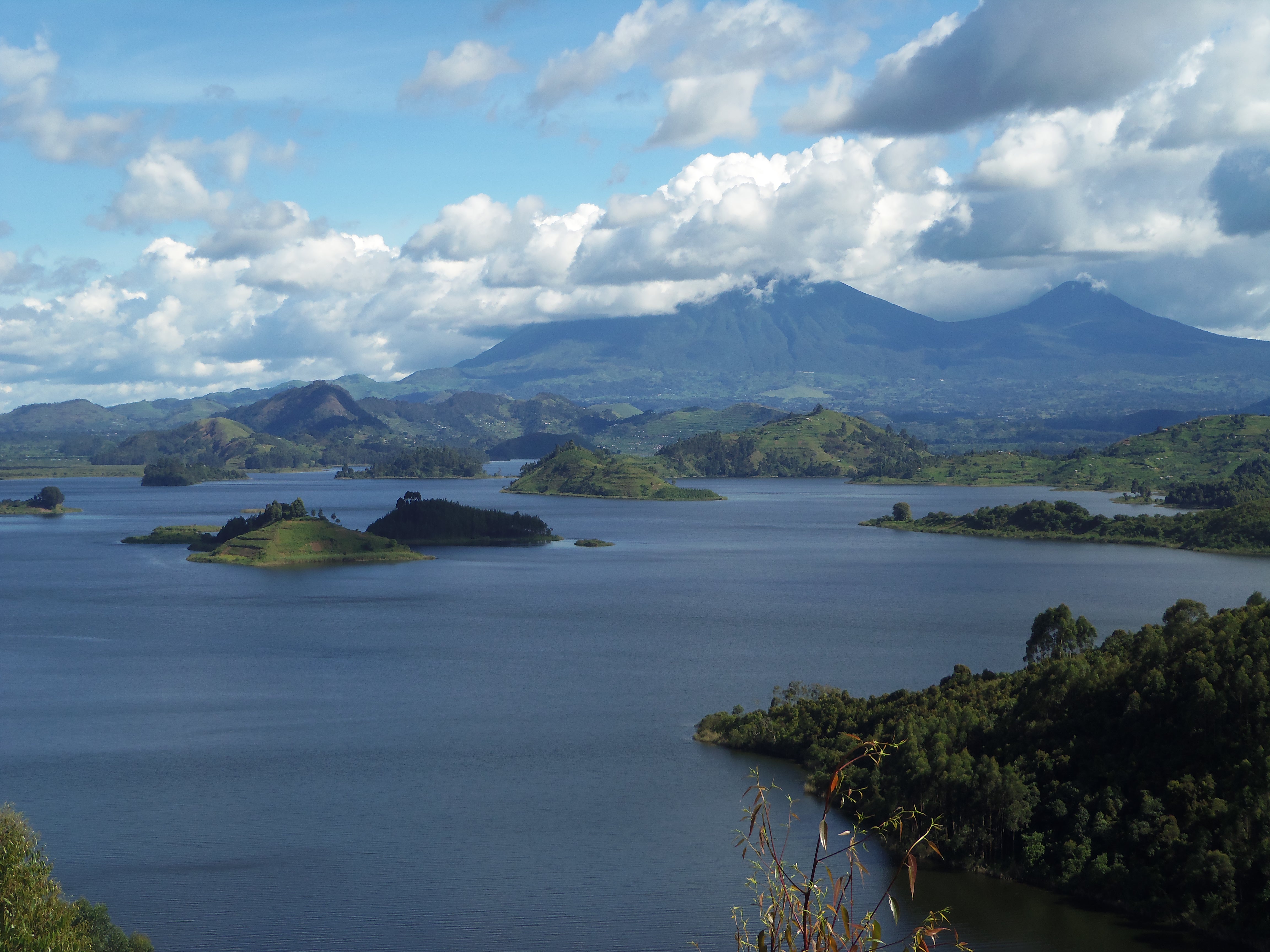 A traditional dug-out canoe and motorized canoe ride offer an exploratory platform of this amazing but unsung lake. A visit to the Python island may sound scary but it is such a rewarding experience of being engulfed in an absolutely natural ambiance on unspoiled island.

The python itself is hardly seen but it is worth visiting because birds nest on the trees and
other wildlife species that nature makes available.

History of man is a history of intrigue, brutality and betrayal; a visit to the Prison Island takes one back to the olden days of the Bafumbira people.

At the Prison Island, the earth speaks of inhumane practices where the aged, criminals, society outcasts and girls who conceived out of wedlock were thrown to die in a horrible manner. A simple hike to a cave unleashes the dreadful scene of the remains of the victims. This activity is not for the fainthearted.

The indigenous Bafumbira people occupy the main island called Mutanda. The lake derives its name from the Island where a close-knit community lives and leads a simple life of subsistence agriculture and fishing. There are a few fish species in this like such as mudfish and catfish.

These people smell a special fragrance of friendliness. The infectious and innocent
smiles of the children is one pricy element of this community that any foreigner can long to savor.

To access lake Mutanda, one has to endure an approximately 10hr drive from Kampala to Kisoro and an additional two hour ride on a meandering and or snaking route to Mutanda area.

Scheduled flights to Kisoro operated by Aerolink are also available for those who cannot stand long-journeys. The proximity of L. Mutanda to Bwindi makes it a perfect base for gorilla trekking and Bwindi Forest Nature-walks.

Minister of tourism, wildlife and antiquities col. (Rtd) Tom Butime has the charged Uganda Tourism Board of directors to foster...

Daring the Bwindi impenetrable forest, ticking it off the bucket list

COVID-19 may cause long term lung damage even after recovery

A section of leaders from Bukedi North districts...