Singer Spice Diana could have made more news than all her concerts combined in just a short clip of an interview with NTV.

The singer originally called Hajara Namukwaya bluntly riposted that she was best in her class and she survived government sponsorship by a whisker. Spice Diana said that during her UACE exams, no one came close in the entire school for she scooped a staggering 32 points, but was locked out of government because she did not pay for application.

However, the “Anti Kale” singer was in for the rudest awakening, as Uganda’s social media army pounced on her with all manner of memes, reminding her that UACE pass mark has never gone past 25 points. Others took time to remind her that joining university on government sponsorship requires no serious application fees.

The memes only got worse by the day, that the singer was forced to coil and produce a correction with evidence.

My mother gave birth to only two kids… I was the third- born. I was born on 32nd December 1990 S…#TweetLikeSpiceDiana pic.twitter.com/aGBFaAEp3S

Am telling my friend I got a CGPA of 32 in my bachelor’s degree of arts in economics and he is arguing.. Please spice come and help me convince this fella #TweetLikeSpiceDiana pic.twitter.com/MJflxb7HY1

When you go for a visitation and the class teacher says your kid got a 2nd grade in S. 6 mocks
#TweetLikeSpiceDiana pic.twitter.com/0FYQSIZ6Ew

What If Spice Diana went to an International school & she just forgot to convert her points. Like Dollars to Shillings 😂😂 #TweetLikeSpiceDiana pic.twitter.com/tToDolNLyK

“I made a mistake during my interview on TV that was due to mistaking my S6 results with S4. Honestly its been long since I left S4 or even S6 I couldn’t remember exactly the points as I have lost touch since. However, let me attach my actual results for you my fans. Am sorry for the miscommunication,” she posted on her social media platforms.

The results posted indicate that Hajara Namukwaya, who now calls self Spice Diana scored aggregate 11 for PLE, Aggregate 34 for UCE and 14 points in a combination of History, Fine Art, Luganda and ICT at UACE.

We however, doubt if once given the microphone again, the singer would say she missed out on government narrowly or she was the best in her class! 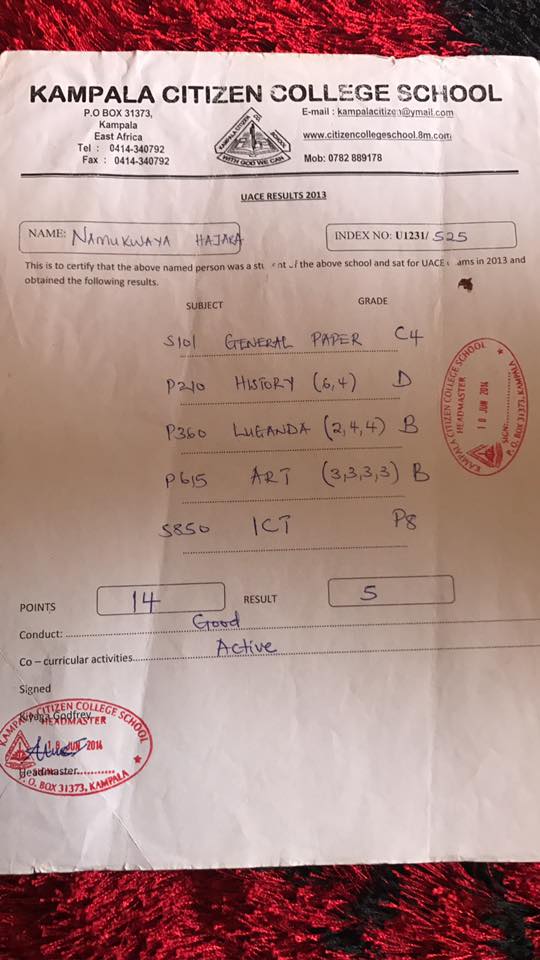 Hey all Spice Diana fans, well i have so much to share with you. First things First thanks for coming through and supporting me in large numbers on all my three shows i had last weekend. I wouldn’t have made it this far without you. We surely made history on my first ever concert in my career and i thank God for all of you that have supported me through this journey.

I also would like to make a few things clear especially whats going on about what i said on TV last friday about my results. I have been going through a crazy phase esp last week when i had a show, then RADIOs death is something i haven’t gotten over plus when I Postponded my concert a week later it affected me personally. I was so stressed but i had to do interviews and try to push the show. This made me disoriented in a way and later i even became sick, Although i had to do the show regardless of what i was going through emotionally.

I made a mistake during my interview on TV that was due to mistaking my S6 results with S4. Honestly its been long since i left S4 or even S6 I couldn’t remember exactly the points as i hav lost touch since. However let me attach my actual results for you my fans. Am sorry for the miscommunication.

Thanks God bless u

The Uganda National Examinations Board (UNEB) has commenced registration of candidates today for the next five weeks ahead of the...

Fear mosquitoes; so much

Two senior police commanders in Mityana have been...