Washington while speaking to NBS TV said the singer was thrown down by a one Troy Wamala as they were moving out of the bar where they had been hanging out.

“I know the truth about what took place. I want to first send my condolences to the family of Mowzey Radio,” Washington started. 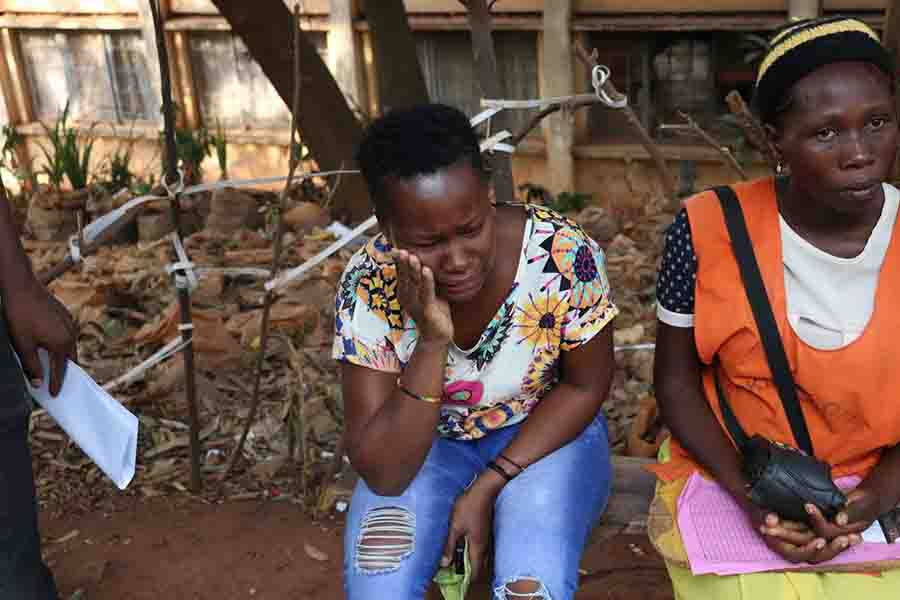 It was on the 23rd of January when this darkness happened. I found Radio at his home in Makindye and he wanted to go to Entebbe because he was constructing a house there. He said I escort him. We got into the car at around 3PM and we drove to Entebbe. We were three in the car. On the way, we were talking about life, love and collaborations. I was so shocked this coming from Radio. On this day, he was talking about the Bible and other things I didn’t expect from him. On the site, he got a phone call from a lady called Pamela.

Pamela told Mowzey to find her at the bar. We walked to the bar around 5-6PM. Pamela was at the bar with a group of her friends which I didn’t know. They sat in a group on the side and I sat on the other side. We didn’t want to mix with people who drink.

I started getting a bad feeling about what was happening. I asked Radio that we go but he insisted and we stayed. I walked out and then went to the car and rested for 10 minutes.

When I met Pamela, I asked her to tell Mowzey that we should leave and then she said Mowzey was about to get done. When Pamela came out, I asked her ‘what are you doing?’ because it was getting late. I insisted and went inside the bar. When I entered inside, they had shifted to the other side. The tone of their voices was on another other level. They were over laughing and Radio was not happy about that.

I sat with him for about 5 minutes. They brought a bottle of whisky and I saw him paying the money. He got the whisky and started pouring in different glasses. He then got agitated and poured whisky on the manager, the one who was talking ill about him.

He (bar manager) then came for Radio and they were separated by this tall guy, Troy, and Hassan. I told Pamela to pick Radio out because they were together. On the way out, towards the door of the club, this tall guy, Troy, came shouting ‘you have disrespected the owner of the bar’. He lifted Radio up and threw him down, heard him hit his head down. I heard his head crack.

My instinct was to first pick up Mowzey. His eyes had shutdown. We drove Mowzey to Emmanuel Hospital and there was a bit of delay. The doctors took ages to attend to him, they out him on drips instead saying he had a lot of alcohol in his system.

I was telling them I heard his head crack and they should check his head. They said they could not handle the case, and instead referred me to Nsambya. We than requested for an ambulance to Nsambya.

From Nsambya Hospital, we were referred to Case hospital because they told us that the ICU was full.

I attended Mowzey’s burial but it is unfortunate that some people think I wasn’t there. I had a security team of about 15 people because I was told I was a key witness in this case. I did not want to take chances because anyone without information would have just landed on me and harmed me.

People have been combined my image with that of Troy and calling us killers. When such things happen, you ought to be careful. It is my uncle Capt. Mike Mukula who advised me to talk about this issue professionally.

Before this, I have been interrogated several times separately with other witnesses and our stories collaborate.

Did Mowzey Radio start the fight?

Mowzey Radio didn’t fight at all. This man Troy grabbed him and threw him down. The picture circulating is of the person who killed Radio. I can’t forget the face of the man who killed my brother.

Mowzey poured whisky on the manager as they were all laughing, I only noticed the manager was not amused with this. I asked Mowzey, what have you done? He said they know what they have done.

He then snatched Radio from Pamela, carried him high and banged him down. At this point I heard Radio’s head crack. I saw his eyes in coma. We picked him up, and put him in my car.

What is Pamela’s role?

I asked Pamela to get Mowzey out of the bar four times. She didn’t do enough to protect Mowzey because she is the one who invited us.

On why they had to meet Pamela, Washington says Radio had intimated that Pamela helps him a lot in his life and he could not come in the middle of their friendship when Radio requested they meet Pamela.

Washington however, says Pamela has been in touch and says she is sad they had to bury Mowzey before getting the murderer.