A new TV audience market survey by IPSOS Marketing Limited, an independent reputable research firm, has confirmed that NBS TV is the most influential and leading English television station in central Uganda.

The research firm interviewed people in the central region that covers Kampala and neighboring districts of Wakiso, Entebbe and Mukono.

The respondents were selected randomly, quality control measures and data validation were carried out by an experienced team of researchers from IPSOS.

Moses Mafabi, the overall project manager said the findings are credible since great care was taken while collecting data and verifying it.

“Have no doubt about the survey results. We are a research firm that prides itself in its reputation. We have built this reputation over the years,” Mafabi said.

This sample area of central Uganda, Mafabi said, was informed by a number of reasons such as being the area with most educated people, being the most economically vibrant region and also being the area where 70% of TV sets in the country are found.

In general, the findings of the research revealed that 97% of the respondents watch two or more television stations on a daily basis meaning people are constantly switching channels. 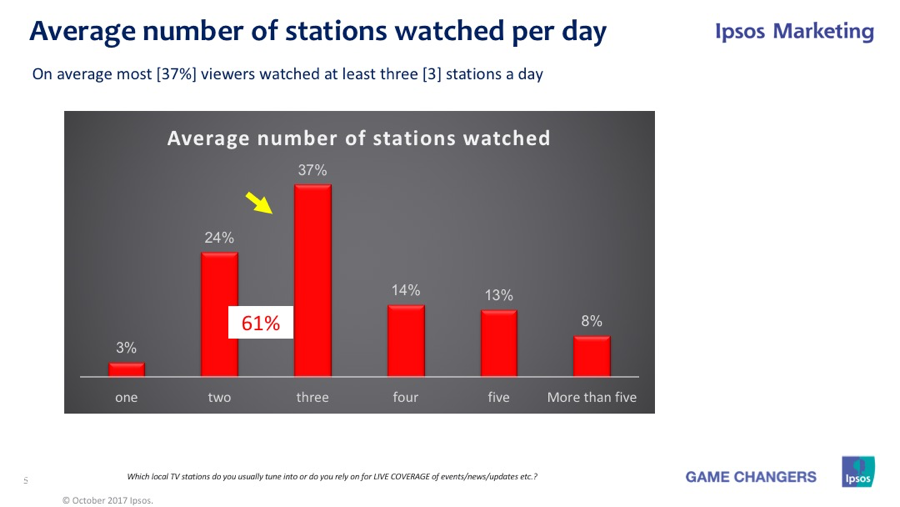 Those who said they consider NBS TV as their main station gave various reasons including:
However, of these, 38% said NBS is the main television station they watch. Closely behind is NTV with 37%. This means that NBS TV and NTV share a total viewership of 75% of the respondents, making them the most watched English television stations in central Uganda. 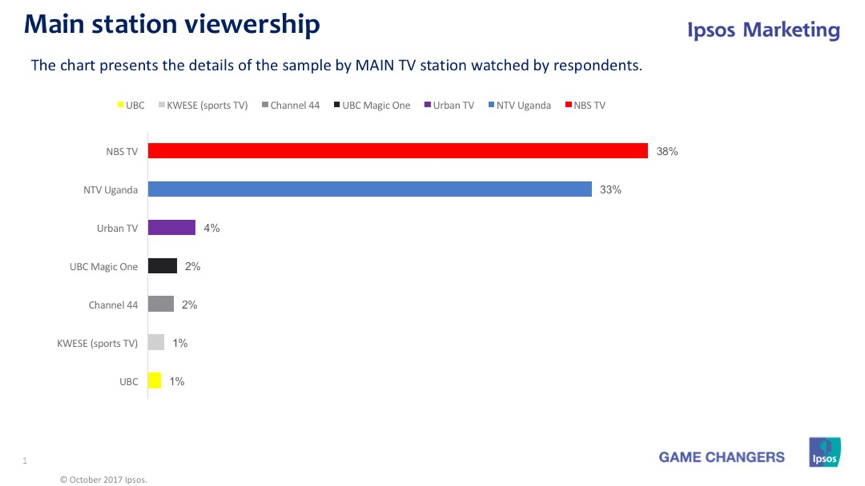 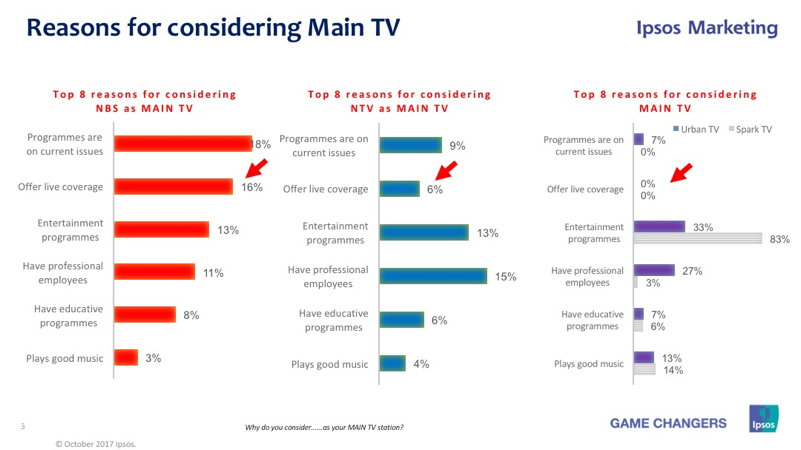 In addition, 54% of the respondents said they rely on NBS TV for live events and current affairs earning it the tag of the main Political Command Centre in the country. NBS TV can telecast live from more than 15 places simultaneously, which no other station can. NBS TV also has the highest “Top of Mind Awareness” as firmly stated by 35% of the people interviewed.

Top of Mind Awareness means that if you randomly picked someone on the street and asked them which TV they watch, four out of ten times they will mention NBS TV without flinching.

Joseph Kigozi, the Chief of Strategy, Next Media, the holding company for NBS TV, was elated by the findings. Kigozi told The Nile Post that the survey re-affirms what has been one of the worst kept secrets in the local TV industry: that NBS TV is the leading TV stations.

“As Next media, we are certainly happy about the findings. They have confirmed what we really know. What the findings mean is that NBS TV is now the station of choice for most viewers in the country. Our current affairs and live broadcasts are unrivaled,” Kigozi said.

Kigozi attributed NBS TV’s surge to the fact that the station has the best talent in the industry.

He said in the next three years, Next Media brands will establish a clear lead between it and competition.

“By 2020, Next Media shall have more than 80% of the market share when it comes to digital and media services in the country. From there we shall take on the region,” Kigozi said.

Pamela Adongo, Head of Marketing at Next Media, said NBS TV’s tremendous growth has been as a result of digital innovation, hard work, team effort and focus.

“There is no doubt that the continuous shift in digital and journalistic skills demands broader and focused ways of reporting news. There is need to adapt quickly to stay connected and meet demands of our audience,” said Adongo.

She added: “The company cannot possibly make all this happen without the help of professional relevant personnel and departments. We have the best when it comes to talent; Investing in the best talent pays off. Having the crème-de la-crème in marketing, engineering, production, programming, the newsroom, sales and other departments has undoubtedly led the station to where it is.”

Kassim Kayiira, the Bureau Chief of Azam TV in the Great Lakes Region and a globally respected broadcast journalist lauded NBS TV for the growth.

Speaking at a training for the newsroom on Tuesday, Kayiira said as NBS TV harnesses this growth, it should keep the audience at the forefront of whatever it does.

“Whatever NBS TV does, it should know that the audience is key. Like business people say the customer is king, in TV the audience is our boss,” said the vastly experienced journalist.

He said NBS TV should leverage this growth to do more as far as investigative and documentary reporting are concerned.

Where NBS TV is ahead

From the findings, NBS TV outdid its competitors in current affairs, live broadcasts and unique programming.

In total, 54% of the respondents considered NBS TV as the unrivaled market leader in those two segments.

According to the survey, the most popular current affairs TV programme is One on One with Tamale Mirundi, that airs on NBS TV every Tuesdays from 9.00 am to 10.30 am and Frontline, a talk show that airs every Thursdays between 10.00 PM and Midnight. NBS’s “Morning Breeze” (38%) emerged as the top program watched in the mornings. It was head and shoulders above its rivals. 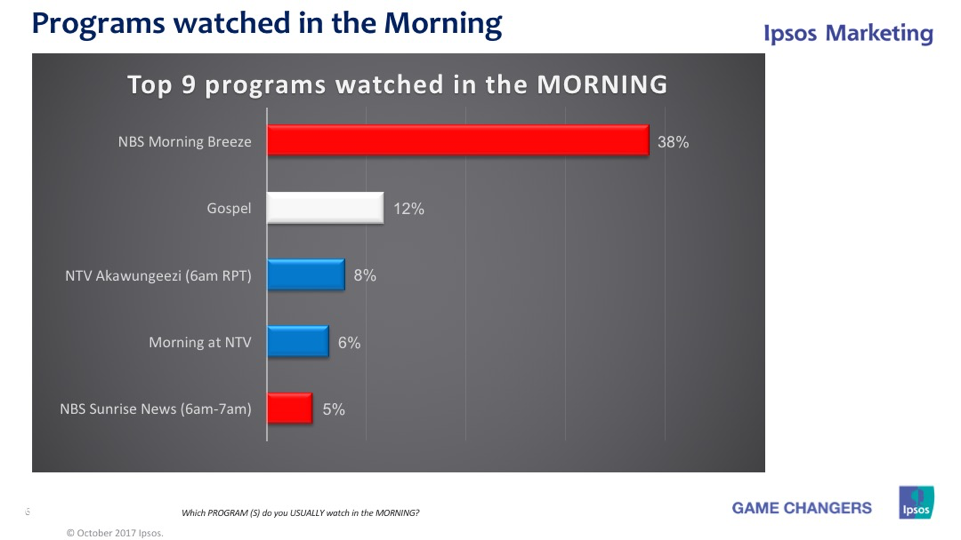 NBS TV also dominated the afternoon segment with NBS Movies, which air weekdays starting at 3.00 PM, gobbling 30% of the viewership in this space. 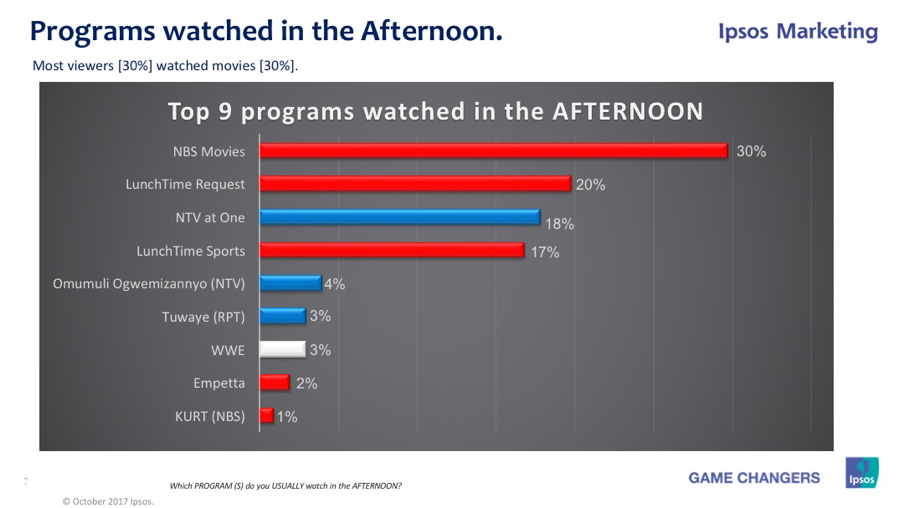 Two of the most prominent programmes in the evening segment, Amasengejje and Big Deal feature on NBS TV however dominated the evening segment. When you combine morning, afternoon and evening TV viewership, NBS TV takes the lion’s share.

In the evening segment where news bulletins play a big part, NBS TV was marginally behind NTV.

NBS TV remains marginally behind its main competitor NTV when it comes to News bulletins both for English and Luganda. 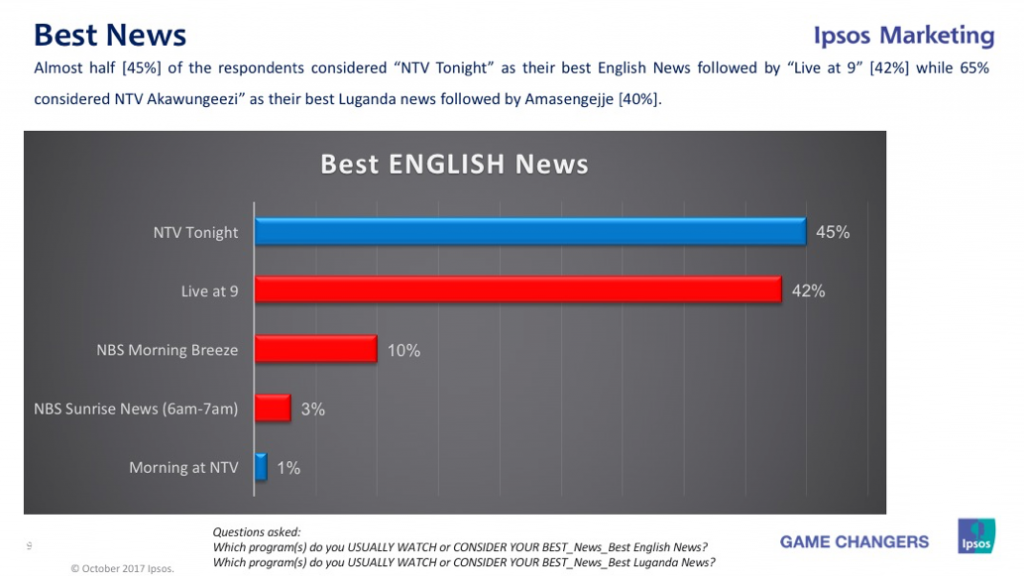 This was attributed to the fact that NBS TV’s programming is geared towards current affairs, which attracts largely male viewership.

Kigozi said this disparity had been caused by the fact that “NTV news bulletins have been in existence for 10 years while Amasengejje and [email protected] have only existed for a couple of years.” 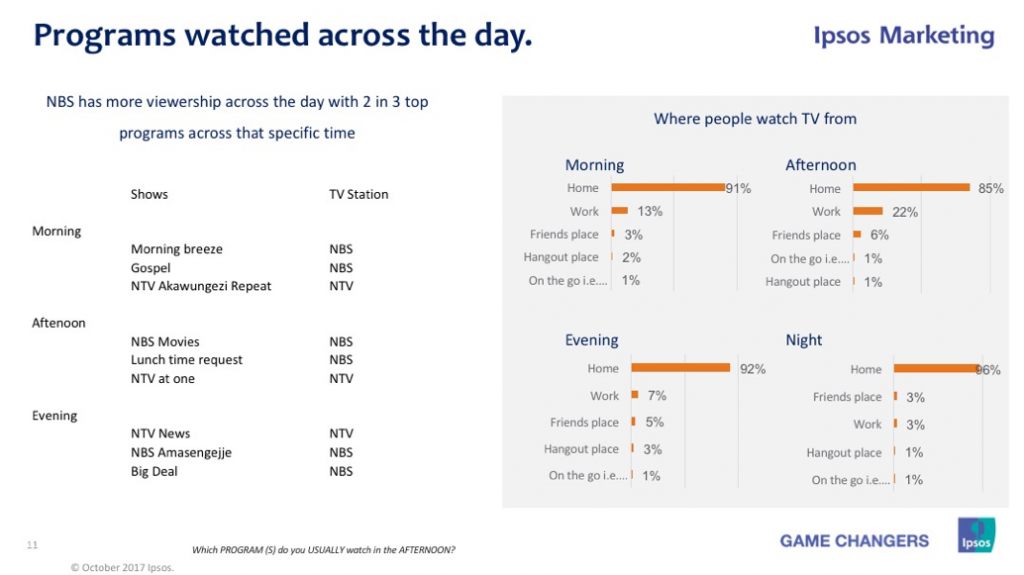 Overall, NBS TV has more viewership across the entire day given the fact that two or more of its programmes dominate a particular time zone.

Senegalese-American musician Aliaune Damala Badara Thiam alias Akon has said that he is not bothered by comments accusing him of...

Besigye: “2021 election proved that Ugandans are still in captivity”