VIDEO: What started as a pimple is humongous swelling

VIDEO: What started as a pimple is humongous swelling

If John Omowot ever gets back to his feet, he may live to thank the day he managed to engage a local hawker at Mulago Hospital.

The thirty-one-year-old, was twitching outside the Uganda Cancer Institute in Mulago and lying in isolation on the floor one afternoon when a one Hilda, a hawker approached him.

Hilda’s initial intention was to try as much as possible to convince the patient, no matter the situation to purchase her items. On coming close, she abandoned the project and instead pitied her intended commercial target.

There was Omowot, with an anthill of a swelling on one shoulder, twisting and turning in pain.

Hilda lived the next hours of her life pondering how she could be of help to Omowot. Her next step was to dash to NBS TV studios in Kamwokya, where she called on us to put Omowot’s plight in the public domain, may be it would help.

I had an idea of Omowot’s condition before I met him, and I imagined the kind of patient I was to meet would be a little chatty since in my earlier encounter with Hilda, she intimated Omowot’s problem was a swollen shoulder.

On Monday, I reached the Uganda Cancer Institute, introduced myself and asked to see John Omowot, just like Hilda had told me. I was directed to where the patient was, outside lying on the ground like it was his medicine.

He strikes you like someone who is clutching on straw hope, he is an exact representation of having nothing else to do, no where else to turn to or having no one else to look for. He has succumbed to whatever situation is happening now and in future.

With difficulty, he responded to our pleasantries, and we told him we had come to interview him. We tried to carry out the interview but the place was noisy so I requested that we move to a quieter place a few meters away. It is at this point that I notice Omowot has difficulty walking, he drags his whole body like its one heavy sack and with each step he makes comes a sigh as if to say (Oh I made that one). 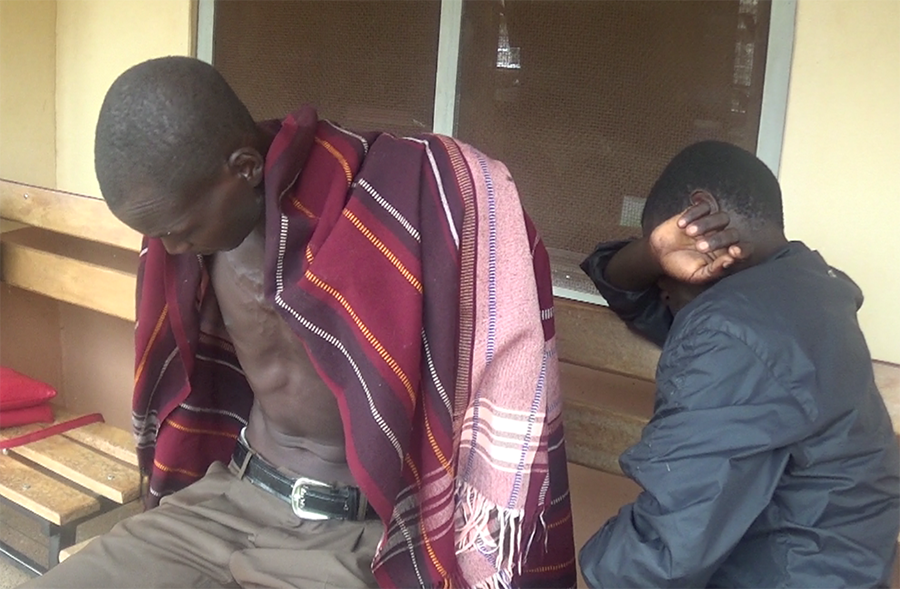 With the help of a caretaker, whom I later come to know is his wife, Florence Atuda, we manage to get Omowot to the interview venue. But we have to wait for a few more minutes to allow him recall his energy- The tank was empty.

Christened John, Omowot is a father of ten. He grew up with his grandfather having lost his father at the age of only six months. Shortly after the death of his father, Omowot’s mother ran mad and so has been her condition to date.

“Although I did not have a good life during that time and most of my life, but everything was far better then than it is today,” Omowot pours his heart on camera before slumping his head against his hands that were positioned on his knees.

He takes sometime there in meditation. Somewhat revealing the reason, we were there; A huge protuberance on his shoulder. A mere sight of it carries all the pain to your nerves.

Swelling starts like a pimple
On January 1, 2011, Omowot got a small swelling on the shoulder, he thought it was a pimple till it burst and turned into a small wound. Just like many, it was not taken seriously. It was something they hoped would disappear with time.

Alas, it did not. Its persistence pushed them into going to a nearby clinic where they were given only Panadol.

“It started as a little wound we never even bothered so from there it continued to grow into a big thing, we decided to go to a clinic where we were given only Panadol but we were advised to go back to the hospital if this persisted,” Omowot says.

On discovering that this small pimple was turning into something bigger than what was expected, Omowot decided to go to different clinics looking for a way of redeeming himself from this new and confusing situation he had started experiencing. Little did he know it was too late. This had come to stay. Efforts to seek medical attention from various hospitals started.

“When the pain became unbearable, I went to Mbale, Soroti  Matanyo hospitals  and to a certain clinic in Kasangati in 2014 and when I went to Katakwi I was advised to come to the Uganda Cancer Institute,” he laments.

He however says that this has not helped. Omowot says that the doctors at the Uganda Cancer Institute have not attended to him.

“I came here on Saturday night but on Monday I started bleeding then I asked the doctor how he was going to help. The doctor said that there is no way I can help until you finish the tests but if you want medicine go buy it yourself. I also buy my own cotton, plaster and the bandages yet I do not have money,” he added.

Where is the hope?

Omowot cannot afford to pay his own medical bills. He adds that sometimes he sleeps without eating because he has no money.  Omowot says that not even his family members can help because they are too poor to give a hand.

“Ever since I came here there is no help that is why I decided to call you to find help for me. I am feeling too much pain and it is bleeding almost all the time. I do not have money and I have a family of ten. If anyone, a church, organization or country can help me I will be grateful. Even my family members cannot help because they have nothing to give.”

While watching her husband belaboring, amidst excruciating pain, Florence Atuda breaks down and sobs uncontrollably. Like the sadness is contagious, it grips Omowot who releases a pair of tears before he reminds him self to be strong.

For some time, we watch on helplessly, as Atuda squeezed in her own corner of sadness and lets a sea of tears off the source of her chest. She comes to terms with the fact that she got to be strong, composes her self and speaks to us before breaking down again.

The two then console each other. It is a world of no support, its only the two of them with no money, no help, no hope. One would not help but pity with Atuda who even in this time has no shoulder to lean on literally.

John Omowot is financially stranded as he awaits his results to confirm whether he has cancer or not. His family back home remains uncertain about their fate yet he was his family’s bread winner.  Any one with any form of help can pass it through 0772847528

The Invisible risks of welding

Government has launched a drive to distribute at least one million Liquefied Petroleum Gas cylinders and burners to Ugandans in...

The Invisible risks of welding