Technically, for any Ugandan keeping quiet about Tigray genocide is to be complicit in the heinous crime.

General Muhoozi Kainerugaba has been vocal about the Ethiopian conflict 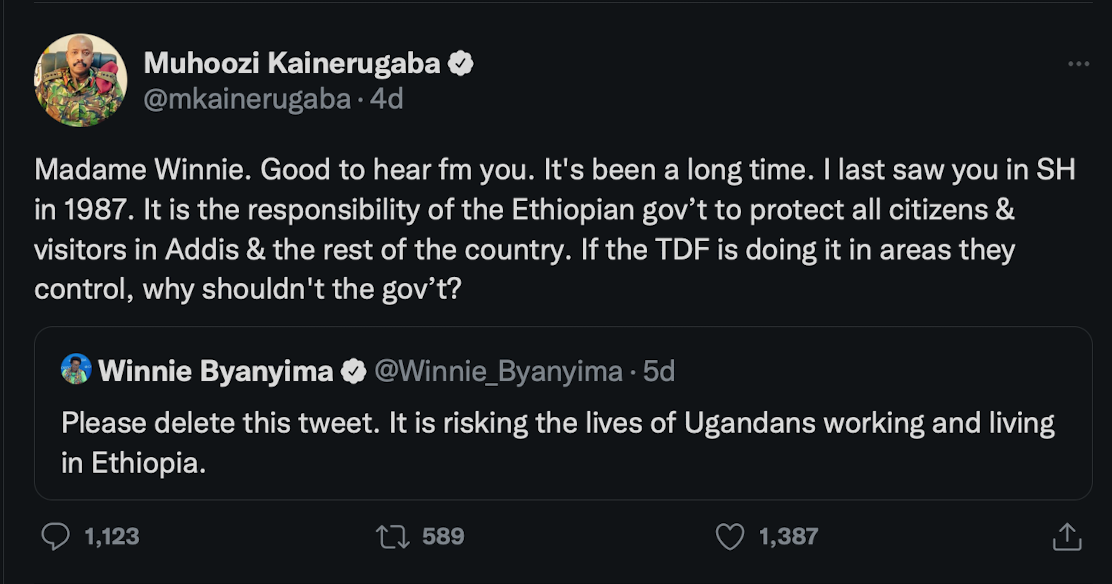 As Milton Obote once said, “leaders take a stand on difficult questions such as turning Uganda into a republic, or leaving it as disparate enclaves of tribal anarchists and medieval feudal kingdoms; opportunists stand on the sideline”, (Communication from the Chair, 1966).

If the fact that Uganda is still a republic is any proof, then Obote was a leader, not opportunist.

William Shakespeare put it even better in the tragedy Gen ‘Macbeth’, where he wrote:

“All by the name of dogs. The valued file distinguishes the swift, the slow, the subtle, the housekeeper, the hunter, every one according to the gift which bounteous nature has in him closed, whereby he does receive particular addition, from the bill that writes them all alike. And so are men (leaders).”

Tigray genocide is an opportunity for Ugandans with a voice to distinguish themselves either as the housekeeper, the hunter; the leader or an opportunist.

One cannot concurrently claim to be a Pan-Africanist and yet keep quiet about the genocide in Tigray simply to protect a few Ugandans, who have made a conscious life-and-death decision to remain in Ethiopia.

Crucially, these Ugandans made the decision despite a series of stark warnings by the know-all western governments including the United States that their citizens must stay away, or write a Will before travelling to that country.

By contrast, some six million Tigrayans including the very old and young babies have no choice about the way they are dying.

That decision is made for them by their government, which is implementing an official policy of ethnic profiling, blockade, bombardment, denial of humanitarian assistance, and the use gang-rape and man-made famine as weapons of war for the last one year.

These acts constitute a text-book definition of genocide, according to the 1948 UN Convention on the Prevention and Punishment of the Crime of Genocide.

What is more, Uganda signed and ratified that Convention a quarter of a century ago this month on 14thNovember 1995.

Technically, therefore, for any Ugandan keeping quiet about Tigray genocide is to be complicit in the heinous crime.

Morally, silence on Tigray is a perfect example of what Edmund Burke said, that “the only thing necessary for the triumph of evil is for good men (and women) to do nothing”.

Indeed, many Tigrayan lives would have been saved if Gen Muhoozi Kainerugaba, other soldiers, politicians and MPs had spoken out 10 months ago.

Led by the first son, Ugandans can still save many lives if they were to start speaking out, loud and clear, now – not tomorrow.