A few minutes to 5pm, the military band played, a procession of senior military officers at the rank Major General escorted the coffin and the body Maj Gen Paul Lokech was brought near the grave, his final resting place at his ancestral grounds in Pader district.

The casket containing the body of Gen Loekch, christened the Lion of Mogadishu for his exploits in expelling Al-Shabaab militants from the Somali capital was draped in national colours as part of a funeral ceremony that honored his lifetime of service to the army and country at large.

The coffin was also topped with his UPDF cap, sword and a wreath of flowers.

As the casket was lowered into the grave, a soldier sounded the bugle- the last post –to announce the demise of a general as part of the military rituals during burial ceremonies.
The clergy led by Rtd Rev. Wilson Kitara , the Bishop of Kitgum Diocese prayed for the repose of his soul.

For the procession, senior military commanders lined up in front of the UPDF funeral van vehicle as they carried the casket whereas senior Police officers formed a guard of honour that was only accessed by the casket.

Maj Gen Paul Lokech, who died August,21, 2021, exactly  eight  months and five  days after his appointment as Deputy Inspector General of Police but also three days after his 55th birthday was being honored at a function that was steeped in military tradition but also pared down and infused with his own personality.

People from all walks of life including politicians and the top military leadership outpoured in praise of the man described as a rare breed of officer that Uganda will take long to replace.

“He was a gifted and unique individual that we may not easily get his breed. He would come and brief me about matters of police in the entire without a file. He would give me the report including names from his head,” Maj Gen Kahinda Otafiire, the Internal Affairs Minister, who was Gen Lokech’s immediate supervisor as Deputy IGP said.

The Inspector General of Police, John Martins Okoth Ochola in a speech read by the Police Joint Chief of Staff Maj Gen Jack Bakasumba could not hold hailing the deceased as the one of best deputies he has ever worked with.

“Lokech made a difference. His heroism and great sacrifices while on duty will forever be remembered. He was one of the best deputies I have ever worked with. He was charismatic and loyal but above all, he had an infectious smile,”Ochola said.

“He has spent only eight months in the Police but he is one of the most respected officers the force has ever had. It is difficult to contend with his loss His name will forever be in the Police wall of fame for the sacrifice he made.”

Many have hailed Gen Lokech who was part of the UPDF troops fighting the Allied Democratic Forces in the early 2000s and the mourners reiterated similar comments on Friday in Pader.

The State Minister for Internal Affairs Gen David Muhoozi who joined the army together with Gen Lokech described him as exceptional.

“In Congo is where I first interacted with him in Bafasende and he later returned the boys home together with our equipment. That was an exceptional feat as a battalion commander,”Muhoozi said of Gen Lokech in reference to the trek from Inside DRC to the Ugandan border with troops.

The Chief of Defence Forces, Gen Wilson Mbadi, too could not hold hailing the deceased general for the DRC feat.

“The other peculiar responsibility was during the operation in DRC. He was able to oversee UPDF troops move over 1000km to the border of Congo when we couldn’t be allowed to use aircraft until he brought them to Uganda,”Mbadi said.

Gen Salim Saleh, the senior presidential advisor on military affairs hailed the deceased as one of those who reformed the UPDF. 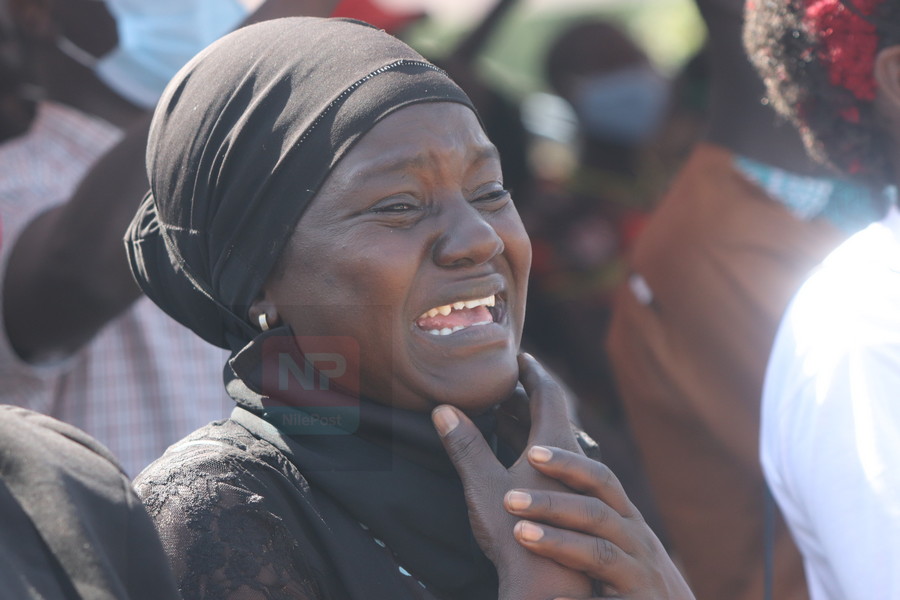 He reminisced the August, 26, 1996 first high command meeting of the UPDF in which Gen Lokech participated as a Lieutenant but made a big contribution to it.

“This shows you the level of reform thinking he had and you can all talk about him as a thinker. Those qualities led him to be a team member of the defence commission who among others suggested that every senior officer who had never been to college goes to the army college. It led to many of us including Gen Tumwine, Gen Sejusa, Mayombo and Okiding to go to the military college,” Saleh said.

Retired Archbishop of the Church of Uganda, Henry Luke Orombi however said that despite his death, Gen Paul Lokech had gone to a better place where he would continue to exhibit his rare skills.

“Gen Lokech touched many lives, influenced and impacted many people. His legacy will never die. When your time for death comes, you can’t stop it even in the presence of your loved ones. The Lion of Mogadishu went to meet the lion of Judah. It will be a joyful union between both lions,”Orombi said.