The young officers dry-practised 8 action-packed drills during which they would respond instinctively and without delay to enemy fire while running, crawling, jumping and shooting at targets set at 25 metres, 50 metres and 100 metres and neutralizing them in seconds.

The drills also included the use of choppers in VIP protection and terrorism and enemy capture in hostage situations.

The president described the training as one that prepares the officers for the best.

“It’s a good beginning for you, don’t lose this chance. One element about fighting is to be sure of yourself. When you are confident of yourself, you can handle any combat situation. I congratulate you upon completing this very difficult course,” Museveni said.

The officers under the Chieftaincy of Military Intelligence, the intelligence arm of the UPDF had been undergoing training in combating terrorism, violent extremism, cyber threats, politically motivated violence and threats that transcend borders.

The officers were trained in buildup areas in the air, under very strenuous circumstances using both small arms and heavy weapons at short and long distances.

President Museveni however warned the group against ‘cowboyism’ and directed the trainers to integrate technics in an ideological context.

Uganda has in the past experienced several incidents of urban terrorism in which several high profile persons in the country including AIGP Andrew Felix Kaweesi, ASP Muhammad Kiggundu, Joan Kagezi, Ibrahim Abiriga and Maj Muhammad Kiggundu were shot dead by unknown assailants who sprayed their vehicles with volleys of bullets.

In a similar incident, the former Chief of Defence Forces Gen Katumba Wamala survived death in a similar fashion by a whisker.

Security has since concluded that an ADF terror cell in Kampala was responsible for all those attacks.

Speaking during the pass out on Friday, President Museveni said such kind of training in counter-terrorism would help equip officers with the necessary tactics to fight urban terrorism.

“These technics are specific to close combat. Don’t look at yours as cowboys. We don’t want cowboyism here. Technics must be in service of the historic mission of the people of Uganda. It is very good that you are confident of your weapons and when you fire, you hit the target using cover, speed and instinct in the right context,” he said. 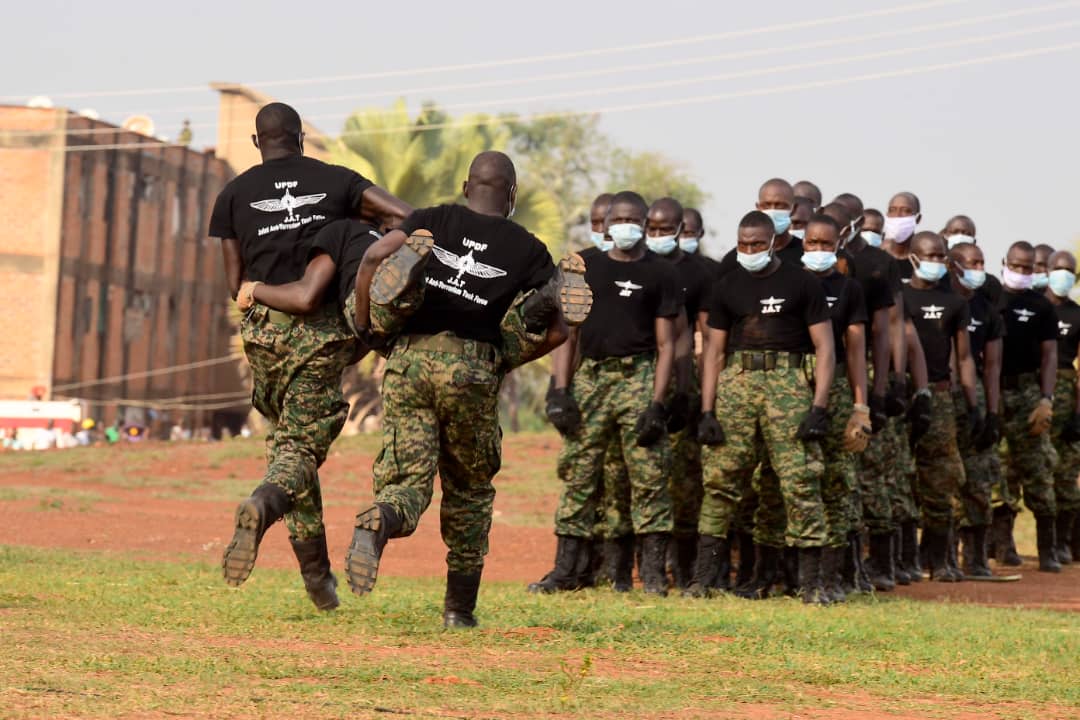 The president who had earlier broken ground for the construction of the Military Intelligence and Security that is estimated to cost Shs 40bn, commended Maj Gen Abel Kandiho the Chieftaincy of Military Intelligence (CMI) commander for ensuring that the training is done by local trainers from the UPDF to enable the army build capacity.

He also pledged to build the military at Nakasongola to a full professional institution.

Speaking at the function, Gen. Kandiho said this is the first intake to be trained exclusively by UPDF’s own professionals.

“This course is a carefully but deliberate effort to build the army to focus on the terrorism that is facing the world today. It comes at a critical time when the country is facing multifaceted threats of terrorism. We must prepare to effectively deal with this,” he said.

Maj Gen Kandiho however urged government to quickly build a permanent school of military intelligence and security in Nakasongola where they have over 2.5 Square miles of land.

“We already support training for other governed agencies like UWA and URA. We are also going to focus on military intelligence and cybersecurity,” he said.

The Chief of Defence Forces Gen. Wilson Mbadi said the completion of the training is part of building a professional army that is modern, effective and efficient to contribute to regional peace.

He said the last training course done abroad cost the institution about Shs9bn but noted the first one conducted by the UPDF itself cost them only Shs920million.

“We urge government to support the UPDF to put the necessary infrastructure for the force since they have capacity for the human resource,” he said.

He urged the graduates to remain patriotic and dedicated to their profession.

Of the 171 officers who were passed out, five were women.

How woman was recruiting, training Kampala teen girls to sleep with dogs

Talking during sex is the power we all need.

Talking during sex is the power we all need.