The NRM takeover of Government on 26th January 1986 received acclamations from many corners of the World.

Writing in the March 1986 DRUM magazine of South Africa stated, “Yoweri Museveni has taken over Uganda. We at DRUM wish him well. Perhaps no country in Africa has so failed to live up to its real and true character since independence. The responsibility that lies before Yoweri Museveni is not just for Uganda, but for the good name of all Africans”.

Thirty five years on, President Museveni has not failed the expectations that surrounded the 1986 takeover.

Peace and security Uganda’s culture of violence pre-dates colonial times when inter-tribal wars were the order of the day.

The violence took a new twist when during the tail end of the 1980’s, the missionary factor ignited religious wars among Muslims, Catholics and Protestants.

The colonial masters took the side of the Protestants whom they used to fight and capture Kabaka Mwanga and Omukama Kabalega who were resisting the colonial onslaught.

The security situation was so bad that the colonial administrator Sir Harry Johnston had to place all the Protestants troops under special surveillance because in his own words, “the Ganda had war like tendencies, possessed 10,000 to 12,000 guns and can deal a serious blow to British (colonial) rule”, which was thin on the ground.

The security situation became worse with the implementation of the 1900 agreement mailo land give away. According to Bishop Alfred Tucker, the mailo implement caused, the whole population to be in movement, “Streams of men, women and children going east with all their household goods, cattle, sheep, goats, and fowls, met similar streams going west”.

The insecurity was not helped when in 1907 the colonists refused to accede to the land rights demands of the Bataka to their Butaka land.

The colonists instead put in place the 1908 land law separating the private mailo from the official mailo (Public land).

This concession did not satisfy the Bataka who reacted by mobilising the Bakopi and together formed the Bataka Party. By 1925 the party had caused such insecurity as to make render the protectorate ungovernable.

The colonists put in place the 1928 busuulu and nvujo law which calmed matters until when the Bataka party was revamped in 1945 and joining other aggrieved groups and sparked off riots all over Uganda.

Worse riots followed in 1949 leading to the banning of the Bataka Party. The void was filled in 1952 when Ignatius Musaazi joined other nationalists and formed the Uganda National Congress.

Other insecurity was to fermented in 1958 when the Mengo establishment orchestrated the anti-direct election riots, burning people’s houses, cutting their coffee and banana plantations and generally visiting with chaos whoever they perceived to have defiled Mengo directives not to get involved in those elections.

The chaos created by Mengo served their designs but chaos and insecurity was visited on the Country in 1966 when the Mengo marriage of convenience arrangement collapsed and Prime Minister Milton Obote emerged as the first executive President of Uganda. Hardly five years later, was Obote Government overthrown in a bloody military coup. Insecurity was the order of the day during the eight years of Idi Amin’s rule.

The NRM Administration’s first priority therefore was to establish peace and order which had eluded Ugandan’s for so many decades.

The new administration had to battle the Joseph Kony’s Lord Resistance Army (LRA), the West Bank rebellion, Jamal Mukulu’s ADF, and dozens of other rebel groups. As the Country celebrates thirty five years of NRM rule, the Country is at peace for the first time in over a hundred years.

Uganda now has a professional army, which is routinely invited to perform international peace keeping duties beyond the borders of Uganda and the Country was deservedly elected to chair the United National Security Council.

The making of a new national constitution formed the cornerstone of the NRM’s fundamental philosophy and objectives right from the commencement of the bush war in 1981.

They had waged a protracted war “against tyranny on a platform of restoring personal freedoms and the amelioration of the social, economic conditions of our people”, Museveni declared when being sworn in as President of Uganda on 26th January 1986.

That commitment could only be translated into reality by being undergirded by a national constitution made by the people and for the people of Uganda.

Thus a constitution commission was set up in 1988 to gather views of the people as to the kind of constitution they wanted enacted.

The commission collected views all over the Country and submitted a report of its recommendations to the Government.

The NRM Government set up a constituent assembly which debated the report and from its deliberations a new national constitution was promulgated on 8th October 1995 by the Constituent assembly in the presence of President Museveni and members of the National Resistance Council. 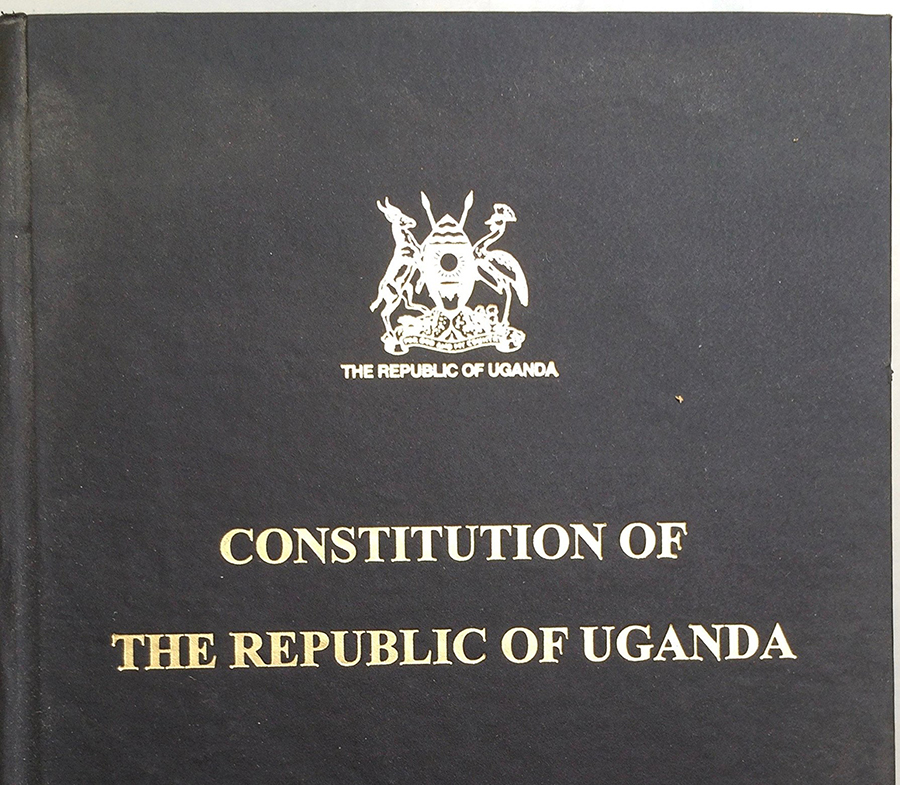 A new era of a government based on the 1995 constitution, had begun. Elections laws Following the promulgation of the 1995 Constitution, laws were put in place to operationalize the constitutional provisions on elections.

The purpose and content of these laws are well meaning and adequately drafted. Their application has led to the holding of periodical free and fair elections as Ugandans express their will and consent on who should govern them.

Previous regimes bequeathed the NRM an economy destroyed to such an extent that to bring it back to a sound basis required adoption of measures unprecedented in Uganda.

These new economic policies included devaluing the Uganda Shilling by a factor of 100% (by chopping off two zeros) and subjecting all cash holdings, deposits and treasury bills to a 30% conversion tax.

Other measures included devaluation of the Ugandan shilling exchange rate from new Shs 14 to new Shs 60 to the US$, interest rate. Inflation, which had peaked at 190% in 1987, was brought down to 26% by 1991.

Further reforms limited government spending and borrowing, while growing the service sector, expanding regional trade, and moving away from a weak manufacturing sector.

In addition the NRM Government removed constraints on small and medium sized enterprises, and in addition to agriculture, prioritised tourism, minerals, oil and gas, and infrastructure development.

Uganda’s gross domestic product (GDP) grew at an average of 7% a year during the period covering 1990s and 2000s.

The first countrywide health emergency which the NRM Government had to grapple within 1986 was the fight against the HIV/ AIDS.

The first step that President Museveni’s government undertook was to admit the existence of the HIV/AIDS epidemic in the country, and to advise behaviour change. Soon the prevalence rates went down.

The country’s healthcare system were strengthened and in subsequent years the country was able to respond to other life threatening hazards like Ebola, yellow fever, measles, the Crimean-Congo hemorrhagic fever, the Marburg virus and currently the NRM Government health measures have helped Uganda record the lowest infection and death Covid-19 rate globally.

Statistics show that primary school enrolment from independence to 1986 had increased by only 1.69 million children.

Currently enrolment stands at over 8 million. Currently, 90%of all parishes in the Country have a primary school, 80% of which are Government-aided.

About 90% of all sub-counties have a secondary school, 67% of which are Government-aided. Each region of the country has a public University.

For the first time in Uganda, the constitution, 1995, gave formal recognition to customary land tenure which had traditionally been outside the realm of the law.

The Constitution further provided for the conversion of both customary and leasehold land tenures to freehold (Articles 237[5] & 237[6]). Gender equity has been made an important policy in land matters.

Section 40 (1) of the Land Act, 1998, makes any transfer of household land subject to spouse’s approval by requiring spousal consent and other consents prior to carrying out transactions on household lands.

The Uganda Land Commission and other land controlling authority in section 4.1 of the Guidelines on the Administration of Land under the Land Act Cap 227 are prohibited from automatic re-entry to a lessee’s land.

Renewal and extension of leases on initial and full term for all citizens are automatic.

Aware that some traditional rulers are still in possession of land titles of public land, (official mailo) Section 9.3 of the Guidelines on the Administration of Land enjoins that the traditional rulers with obligation to uphold and honour all the terms and conditions of the existing lessees.

Clearly the NRM is determined to give all citizens of Uganda security of tenure and ownership of land in perpetuity.

When Uganda attained independence on 9th October 1962, there was no longer any role for traditional rulers as indirect rule structures under which they were relevant during colonial rule had, with independence become obsolete. The independent Government did not need any structure through which to indirectly rule Uganda.

However in 1993 pressure was mounted by those who had enjoyed privileges which they lost in the collapsed indirect rule structure as imported in the 1962 constitution won the day.

They repackaged their demand in the form of rights of citizens of Uganda the freedom, to adhere to the culture and cultural institution of their communities.

They thus rushed through the Constitution (Amendment) Statute 1993, which repealed Article 118 of the 1967 Constitution, which had abolished the kingdoms, and the Traditional Rulers (Restitution of Assets and Properties) Statute 1993)giving away public land (official mailo) to traditional rulers.

The new constitution considered the Traditional Rulers (Restitution of Assets and Properties) Statute 1993) a nullity and placed the administration of all public land under the either Uganda Land Commission, District Land Boards or Regional Land Boards.

However some traditional leaders took the provision of Article 246 of the constitution which put in place the institution of traditional or cultural leadership as a return to indirect rule which was imported in the guise of federal unit of administration in the 1962.

Surprisingly the traditional rulers have continued to agitate for the return of “their things”.

They believe Ugandans owes them these privileges, and have resolved themselves into self-appointed spokesperson of their ethnic groups whereas Ugandans have resolved to be ruled under in a multi-party constitutional democracy where the political parties espouses the interests of Ugandans in their respective election manifestos.

It is always the past and the present which shape the future. In the current scheme of things it is apt to use the words of Sir Williston Churchill, that those thirty five years of NRM administration have been “their (read Uganda’s) finest hours”.

The author is a senior partner at Kampala Associated Advocates

Opinion: Why President Museveni, the West loathe but need each other

Opinion: Why President Museveni, the West loathe but need each other