The Bailiffs and Executions Division of the high court has been officially closed leaving behind over 11,531 files, of which 8,061 are ongoing whereas 3,470 files have been completed during its 9 years tenure.

While handing over the Final Re-organization of the Bailiffs and Executions Divisions report to the Principal Judge Justice Flavian Zeija, the committee chaired by Justice Henriette Wolayo has
recommended the best practices that the committee presumed to be crucial in setting standards in the execution process across Ugandan Magistrates court and other courts. 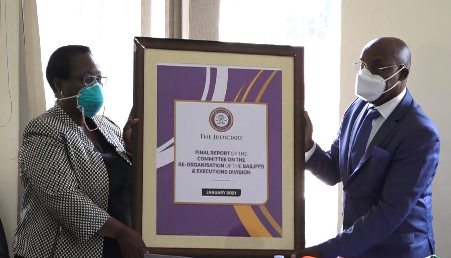 “In addition to this report in which we made some recommendations in relation on best practices that can be rolled out to magistrate’s court and perhaps other divisions to improve the execution process.”

“Only registered valuers- those registered under Uganda Surveyors Act should be assigned work to value. In the past any valuer would come up and come up with various sorts of valuations of the same property. We also recommend that registrars and other executing officers, the magistrates should take charge of this process and should be the ones to appoint values and not leave this task to bailiffs,” Justice Wolayo recommended.

In 2011, the then Principal Judge Yolkham Bamwine Created an Execution Division at the High Court to handle executions from all the Divisions of the High Court and Surrounding Magisterial areas of Buganda Road, Mengo, Nakawa, Nabweru and Makindye.

However, its sole purpose hit a stumbling block as it was welcomed by a lot irregularities and unethical practices as the Principal Judge Zeija clarifies.

“The Division was started as an experiment. We intended to remove the execution process from the adjudication process s and it was supposed to be reviewed in two years to see that the process was better than the previous we were using. Over time the review did not happen and
advocates kept complaining about the execution process, the delays that come with it especially during the process of appeal and the movement of files. What would happen is that when you complete a file in a division, it would have to be moved to the execution division, so
they were complaining that – process would create a lof of delays, “Principal Judge Zeija affirmed.

With the inception of the final report, the principal Judge hope to make some adjustments in the Judiciary especially with resources at hand.

“Identifying best practices puts us at a drawing board especially training registrars who are bnow going to take over this job of execution,” explained.