U.S. President Donald Trump on Friday celebrated the death of the commander of Iran’s elite Quds Force, saying the airstrike that killed the shadowy Qassem Soleimani was long overdue.

Speaking publicly for the first time since defense officials confirmed Soleimani was the target of a U.S. strike near Baghdad International Airport on Friday, Trump also warned Iran that it risked more strikes if it continued to target Americans.

“We took action last night to stop a war,” Trump told reporters at his home in Mar-a-Lago, Florida. “However, the Iranian regime’s aggression in the region, including the use of proxy fighters to destabilize its neighbors, must end and it must end now.”

Trump blamed Soleimani for the deaths of thousands of Americans, Iraqis and Iranians, saying the longtime regime general “made the death of innocent people his sick passion” while helping to run a terror network that reached across the Middle East to Europe and the Americas.

“We take comfort in knowing his reign of terror is over,” the president said, adding the U.S. had already identified additional Iranian targets.

“If Americans anywhere are threatened … I am ready and prepared to take whatever action is necessary,” he said.

Iraqi officials said another airstrike early Saturday, carried out about 24 hours after the one that killed Soleimani, targeted a convoy carrying Iran-backed militia north of Baghdad and killed at least five people. There was no immediate confirmation of the strike from Washington.

So far, U.S. officials have given few details about the strike that killed Soleimani and Abu Mahdi al-Muhandis, the deputy commander of Iranian-backed Iraqi militias, known as the Popular Mobilization Forces.

“He had just come from Damascus, [Syria,] where he was planning attacks on American soldiers, airmen, Marines, sailors and against our diplomats,” O’Brien said.

“Soleimani was planning imminent attacks against American diplomats and our armed forces members in Iraq, Lebanon, Syria and in the region,” the official added.

The comments by senior U.S. officials came as fresh U.S. troops were setting up in Kuwait, part of Washington’s plan to protect bases and personnel across the Middle East in anticipation of Iranian-directed violence.

About 750 soldiers from the 82nd Airborne Division’s Immediate Response Force touched down at Salem Air Base on Friday, with U.S. defense officials confirming the force’s remaining 3,000 troops were on their way.

A Defense Department spokesperson called the order for the additional soldiers “an appropriate and precautionary action,” citing “increased threat levels against U.S. personnel and facilities.”

Defense Secretary Mark Esper said the 3,000 soldiers had been put on notice earlier in the week, telling reporters Thursday that the Pentagon would deploy more forces “as needed.”

The deployment came as Iranian officials and Iranian-backed militias in Iraq amplified their calls for revenge after the U.S. airstrike that killed Soleimani.

“All enemies should know that the jihad of resistance will continue with a doubled motivation, and a definite victory awaits the fighters in the holy war,” he said in a statement carried on Iranian television.

The US bears responsibility for all consequences of its rogue adventurism.

21.6K people are talking about this

Meanwhile, Kataeb Hezbollah, the Iranian-backed militia that sparked the recent escalation with a rocket attack on a military base in Kirkuk, Iraq, that killed an American contractor, warned the U.S. “will pay a heavy price.”

“Grave consequences will be borne by America, the Zionist entity, and the kingdoms of evil,” the militia said in a statement translated by the SITE Intelligence Group. “Are they unaware that we will become a thousand Soleimanis and a thousand Abu Mahdis?”

How or when Iran might respond to the strike was unknown. U.S. defense and intelligence officials have long warned about Iran’s penchant for using asymmetric techniques, like terrorism and cyberattacks, to target the U.S. and Western nations.

“What we are very likely looking at is a series of tit-for-tat escalations and asymmetric strikes that probably won’t be limited to Iraq or to the Middle East,” Kirsten Fontenrose, director of the Scowcroft Middle East Security Initiative at the Atlantic Council, told VOA via Skype.

“Iran isn’t opposed to kind of hitting us in the belly,” Fontenrose added. “And I think it will mean a little bit of vulnerability at our embassies and for our diplomats who live on the economies and countries where they are posted.”

The United States has about 5,000 troops in Iraq and another 55,000 across the Middle East, all of whom could be targeted by Iran.

The U.S. Embassy in Baghdad told Americans Friday to “depart Iraq immediately” because of the heightened tensions.

Some U.S. cities have also heightened their alert status, concerned that Iran could use its ties with terror groups like the Lebanese-based Hezbollah in an attempt to strike the U.S. homeland.

“We have never confronted in recent decades the reality of a war with a government of a large country with an international terror network at its behest,” New York City Mayor Bill de Blasio said Friday. “New Yorkers deserve to know that we have entered into a different reality.”

But Chad Wolf, acting secretary of the U.S. Department of Homeland Security, said in a statement Friday, “there are currently no specific, credible threats.”

I commend the President’s decisive action to protect American lives both abroad and at home. Full statement: 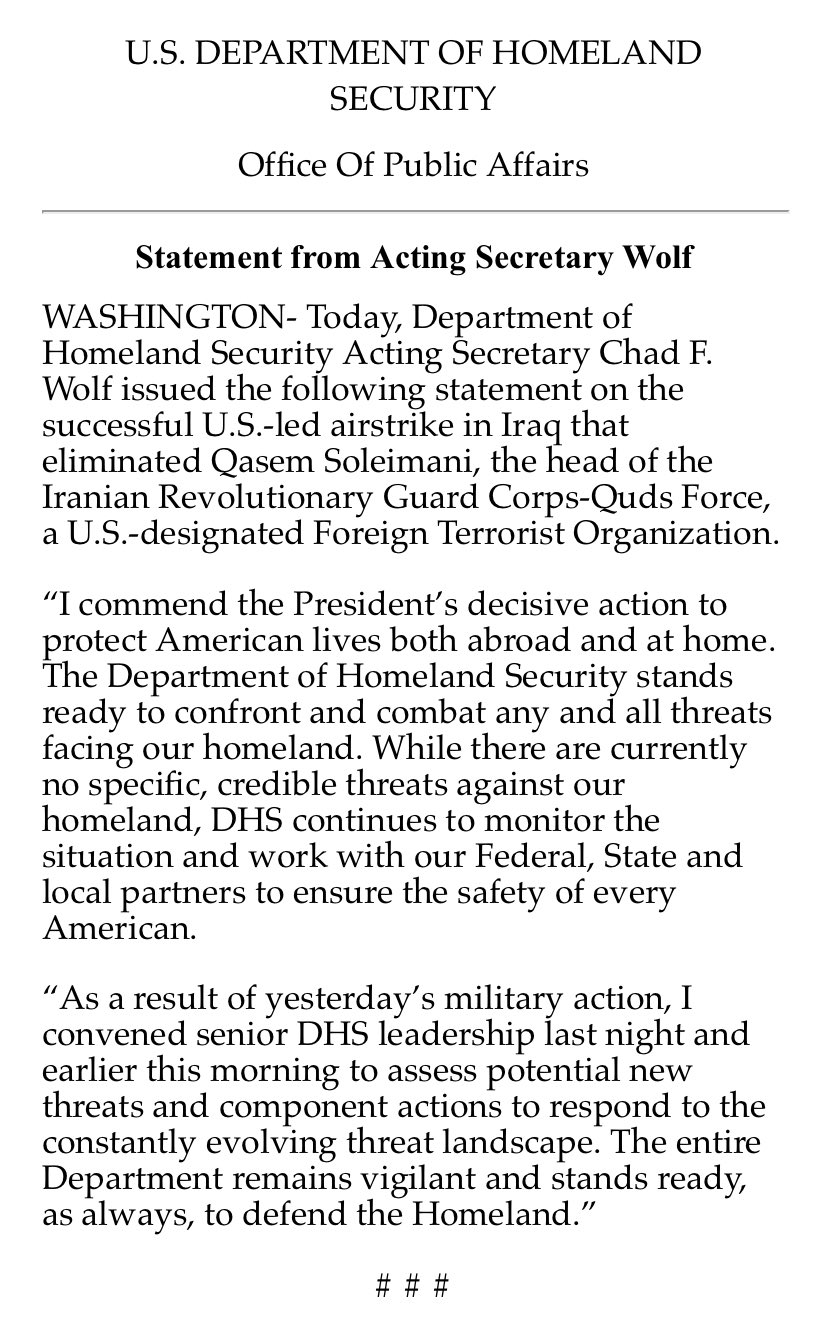 462 people are talking about this

Some senior U.S officials also doubted, despite its tough talk, that Iran and its proxies would be in a rush to respond with anything that could resemble an act of war.

“We’re speaking in a language the regime understands,” the official added, noting Iranian officials were now clearly aware of the high cost that would come with such action.