1,463 schools participated in the tournament competing for a chance to get their school pitches refurbished by Coca-Cola as well as other exciting prizes such as goal posts and nets, brand new 32-inch TV sets and mobile phones.

Following the successful conclusion of the 2019 COPA Coca-Cola grassroots football
tournament, Coca-Cola has today awarded the schools and students that collected the most
plastic as part of the Copa Coca-Cola recycle and win competition, a campaign aimed at
ensuring a world free of waste. 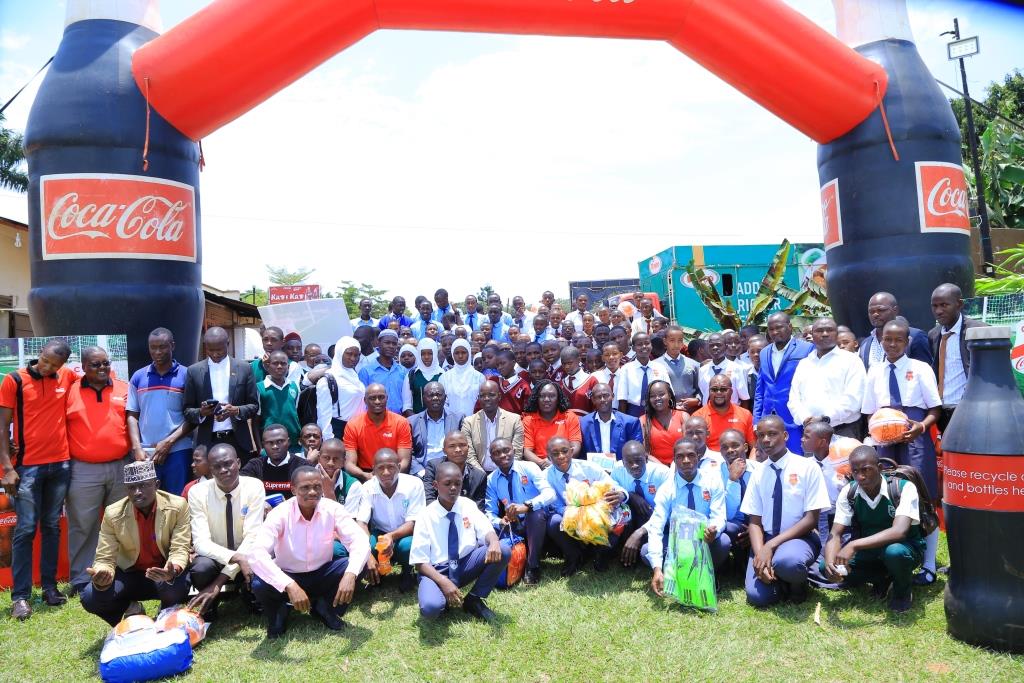 1,463 schools participated in the tournament competing for a chance to get their school pitches
refurbished by Coca-Cola as well as other exciting prizes such as goal posts and nets, brand
new 32-inch TV sets and mobile phones. The prizes also included cash sums for the total
kilograms collected and scholarships for participating students.

Byamugisha Osward, also a teacher at Kanyabwanga S.S and Kenneth Akuguzibwe, a student
from Kasese S.S, emerged overall best teacher and student in the recycling campaign and
walked away with a brand new laptop and school fees respectively.

Commenting about the campaign, Sam Kangave – Manager Plastic Recycling Industries, an
initiative of Coca-Cola Beverages Africa in Uganda applauded the schools, students and
teachers for participating in this campaign that benefits both the current and future generation.
He further noted that The Coca-Cola Company and all its bottling partners are leading the
industry to help collect and recycle a bottle for every one we sell by 2030. We are working to
bring people together to help us collect and recycle plastic in Uganda and this campaign is
giving the young generation lessons about the dangers of plastic while giving back to them and
their schools through a sport that unites them.

Currently, we are collecting an average of 450 tonnes of plastic per month at Plastic Recycling
Industries, an equivalent of about 66% of the plastic we push out as Century Bottling Company
and Rwenzori Bottling Company. Part of our effort going forward is to help everybody
understand Recycling – how to recycle, what to recycle, where to recycle, and the impact of
NOT recycling properly. But we cannot do it alone. So far we have established successful
partnerships with an eco-system of plastic waste collection Women groups in Kampala, the
Kampala Capital City Authority, Masaka Collection Centre, Kabale Municipal Council, to
mention but a few.

We are keen to sign up more partnerships, because the only way we can really create a World
Without Waste is if we ALL do it together.

According to Arthur Akankwasa, the Coca-Cola Uganda Country Manager, “The recycling
competition has been an eye opener for us, affirming the fact that creating knowledge and
awareness about waste and its responsible management is key to sustainable behavior change.
As the Coca-Cola system, we will ensure we continue with such campaigns targeting both
awareness and behavior change on plastic waste collection and disposal. This will go a long
way to ensure that the teens grow to be responsible members of the community.”

The winning teacher will receive a 32 inch Hisense TV set while the second and third best will
receive brand new mobile phones. The winning students will receive school fees scholarships
for 1 term.

ABOUT COPA COCA-COLA
Copa Coca-Cola is held in more than 60 countries with over one million participants annually.
Coca-Cola has been a proud sponsor of grassroots football for 25 years. What started in
Zimbabwe in 1988 was formalized under Copa Coca-Cola in 1998, when it was first launched in
Mexico. The aim of Copa Coca-Cola is to create the world’s largest and most inclusive football
grassroots program.

The Copa Coca-Cola national tournaments and international training Camps have provided an
opportunity for many exceptionally talented players to be scouted and recruited to join the
national under 20 teams in their respective countries with a number joining premier league clubs
both in their countries and internationally.

COPA COCA-COLA IN UGANDA
In Uganda, Copa Coca-Cola is the biggest grassroots’ football development program/
tournament in Uganda for the last 26 years since its inception in 1993. Starting with four (4)
Kampala based schools and about 120 players; it has grown to be informally known as the “The
Schools World Cup”.

Today over 80,000 players from approximately 3,000 secondary schools every year participate
from the Zones, Districts, Regions and upwards to the National Level. At the National level, the
organizers have a team of qualified coaches who pick talent and compile a list of the most
promising 200 players which is in turn handed over the local Soccer Governing body –
Federation of Uganda Football Associations, (FUFA) for follow up.

Almost all key football Clubs in the Uganda Super League feature products of Copa Coca-Cola.
Among the key players in Uganda’s National and International teams that rose through Copa
Coca-Cola are: Ibrahim Sekaggya, David Obua, Gibby Kalule (1999 All Africa Games in
Johannesburg South Africa) and Farouk Miya, Godfrey Walusimbi, Shaban Muhamad and
Khalid Aucho, among many others and more to come.

The tournament is conducted in partnership with the Ministry of Education and Sports through
the National Council of Sports (NCS).