Young African leaders and elites who spearheaded the rise of African nationalism put an end to the stay of Asians who had long come from Gujarat and Punjab in the 19th century and settled in East Africa. The decision to have the Asians expelled was initiated by Obote of Uganda, Nyerere of Tanzania and Kenyatta of Kenya. The trio accused the Asians of being front-runners of colonial exploitation. As such during their struggles for independence, they put it before the British colonial Secretary Duncan Sandys to have Asians holding British Passports to be expedited back to their respective homes of origin before they would conclude the independence of the three East African countries.

To this effect, Obote took strong measures against the Asians in Uganda. In the Republican constitution he inserted a clause that only citizens of African blood could own land, property or business. He passed a legislation to cancel resident’s permits trading licenses and labor permits of Asians. This took away the livelihood of as considerable number of Asians, Obote went ahead to cancel their Ugandan passports using the law that they had not renounced their previous nationality in the presence of a magistrate and two witnesses within 90 days of applying for the Ugandan nationality as was required by law. This meant that even the Asian Members of Parliament ceased to be Ugandan citizens. It was without doubt that these developments marked the end of Asian stay in Uganda. 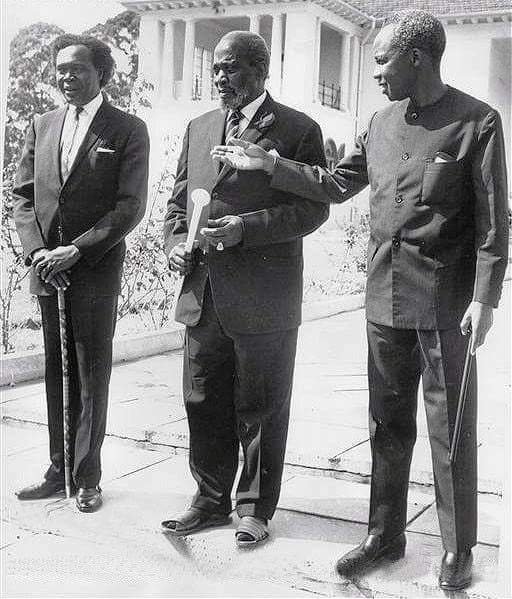 On the eve of Kenyan independence negotiations Kenyatta put forward before Sandys Duncan- the British colonial secretary the Asian question in Kenya. Duncan’s response was that the “British passport-holding Asians were a British responsibility” On this premise, Kenyatta refused to sign the proposed terms of independence until the Asians were out of Uganda. The only difference with Kenyatta was the conscious strategy of expelling Asians in Kenya. As such, he under took not to expel the Asians the “Amin way”, but would gradually squeeze them out of Kenya. His strong point against the Asians was exactly that of Obote- The Asians had dominated trade, industry and commerce. And to him, political independence would only make sense if was closely accompanied by economic independence.

Mwalimu Nyerere joined his counter parts in strategizing how to flush out the Asians in East Africa. In agreement with British colonial masters, it was clear that Asians had to leave East Africa. How would they do it? Duncan refered to the British Common Wealth Immigration Act of 1968 which limited the number of Asians into Britain from East Africa to 1,500 a year. And that Asians needed to be first granted vouchers before they could be accepted in Britain. This meant that the three East African countries would have to keep their British Asians for about another ten years. This infuriated Nyerere together with Kenyatta and Obote. The trio therefore induced Britain to increase the number to 3500 Asians anually. As the trio mounted more pressure on the British government, Edward Heath, the British Prime Minister accepted to increase the number of Asians leaving East Africa to 20000. This was not any better to Nyerere who always appeared to be the patron, if not chairman of both Obote and Kenyatta. It is argued that Nyerere, with his principled Pan African and nationalistic credentials wanted the Asians out of East Africa more than his counter parts.

Apart from the nationalistic feelings of the time, there were several common but also unique reasons why the three actors wanted the Asian expulsion to be expedited. For the case of Uganda, the Ugandan government argued that between 1962 and 1968 sponsored 417 Asians for training as Engineers, none of them took work for the government upon completion, 217 Asians were trained as doctors, not more than 15 of the Asians worked for the government in the established government medical facilities, out of the 96 lawyers only 15 were serving the legal department of government. Even the few Asians who had previously gone into government service shortly resigned for selfish reasons, just because they never wanted to be transferred from Kampala, Jinja and Mbale. Many of them had alternative business out side the civil service. To this end, Amin spoke with bitterness against Asian doctors who refused to go to up country places like Gulu, Soroti, Apac, Atutur and Iganga.

Besides, the Asian communities were unpopular in East Africa because they were speaking in Gujarati and Hindustan, they looked down on the black race of East Africa. Worst of all cheated poor Africans in their own country. In this respect, they were violating the income laws (keeping two sets of books, one in Guajarati which African officials could not read), bribing heavily to obtain income licenses, passports, tenders and application for citizenship, they further by smuggled goods out of the country, sending their money illegally out of East Africa, charging usurious interest rates.

Picking it up from the fallen leaves of the trio (Obote, Nyerere and Kenyatta) Amin announced “ There is no room in Uganda for people who have decided not to take up local citizenship, especially people who are encouraging corruption”. Acting within the diplomatic antics, he gave the British government an ultimatum of three months to recall its Asian British passport holders in Uganda and simultaneously summoned the British High Commissioner in Kampala, Mr Richard Slater to arrange for their removal. The undignified exchange of David Lane,the British Under Secretary at the home office. Amin replied, “My decision is final, all Asians must go”. In London, the foreign Minister, Wanume Kibedi, equally firmly stated that the Asians had to go. Shortly Amin added “ I am determined to teach Britain a lesson over the Asians. I had a dream in which God told me to effect the expulsion.”

Ripon Geoffrey, the Chancellor of the Duchy of Lancaster flew to Kampala to persuade Amin to change his mind about expelling Asians, but it was not possible to access the President. He flew to Nairobi to see Kenyatta for the same but also bounced and finally flew to Dar es Salaam to see Nyerere to discuss the Asian question. Although Ripon was a senior member of the British government, he was not able to talk to Nyerere, but met Rashidi Kawawa-Vice President. Time was out for the Asians. The United Nations High Commissioner for refugees and other Asian countries organized for the rapid evacuation of the Asians. One would argue that Amin was simply a special ambassador of Obote, Nyerere and Kenyatta, for he was implementing what the trio had started. If it was not an organized and strategic decision of Ripon failing to see all the big East African leaders, then what was it?

All that said and done, the three actors and agitators of the East African independence laid the strategy to make them exit Uganda, the reason and purpose the official expulsion. It is therefore misleading, improper and unfair for the wrong history that it was Amin who expelled the Asians. It was Obote, Nyerere and Kenyatta.

From the ashes of genocide, Islam rises in Rwanda

From the ashes of genocide, Islam rises in Rwanda