Sudhir who was represented by the Speke Resort Munyonyo employees won the Lifetime Tourism Achiever  award because of his dedication to investing in tourism through the hospitality sector. 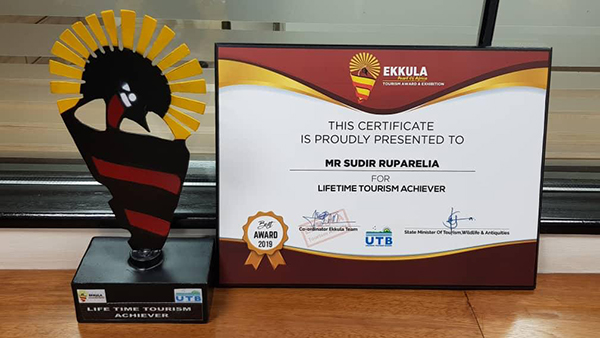 Sarah Kagingo who is also the President of the Public Relations Association of Uganda (PRAU), took home the award of exceptional promoter of tourism using social media. Kagingo has tirelessly promoted Uganda’s tourism potential on her various social media platforms.

Upon receiving the ward, Kagingo thanked everyone who has helped marketed Uganda and promised to continue showcasing the best of Uganda.

The night also saw the state minister for Tourism Godfrey Kiwanda, walk away with the award of Tourism personality of the year.

Kiwanda was awarded for his dedication to supporting Tourism growth especially in the private sector through his ministry.

The awards ceremony organized by Brand Ambassadors 256 was officiated by the deputy speaker of parliament Rt.Hon. Jacob Oulanyah .

Hundreds of key players and influencers within Uganda’s tourism sector graced the event.

“I thank the government and private sector for working together to improve the sector because it holds the treasure of this country and if we invest in it we don’t have to look elsewhere for assistance,” he said.

Kiwanda appreciated the organisers of the awards for being creative and innovative.

He pledged government’s support to private sector driven initiatives like Miss Tourism Uganda, Miss Curvy, the Rolex festival among others

The awards ceremony is aimed at recognizing individuals and brands that have relentlessly stood out in the tourism industry for their selfless service.