Rights groups are voicing concerns about Sudan’s violent action against anti-government protests, which have been sweeping the African nation since last December. The rights groups say the action has left at least 60 people dead and hundreds in jail.

The rising costs of bread and fuel sparked the initial protests, which quickly escalated to demand removal of longtime President Omar al-Bashir.

“These protests are ongoing daily and they have been met with quite a lot of violence and abuses by government security forces that inflict very brutal beating on people as they arrest them. Many have been killed so far,” she told VOA.

A senior Sudanese official who spoke to VOA on condition of anonymity said, “Protesters are taking advantage of the situation and violate the law by stealing, looting and damaging government property.” He said there were fewer than 31 cases. Yet this is still a “large number and a grave concern,” the official admitted.

Local residents charge that Sudanese authorities are targeting everyone who sympathizes with the protests.

Momena Bashir said that her father, Muawiya Bashir, 57, recently died at a hospital in the capital, Khartoum, after Sudanese police shot him inside his house.

She said police had targeted her father because he harbored some protesters who were hiding from Sudanese security forces.

“My father had sympathy for the protesters,” Bashir told VOA. “My father believed that the Sudanese regime is corrupt and is destroying our country.

“We don’t know what will happen to us. We are still in a state of shock … after my father’s death.” 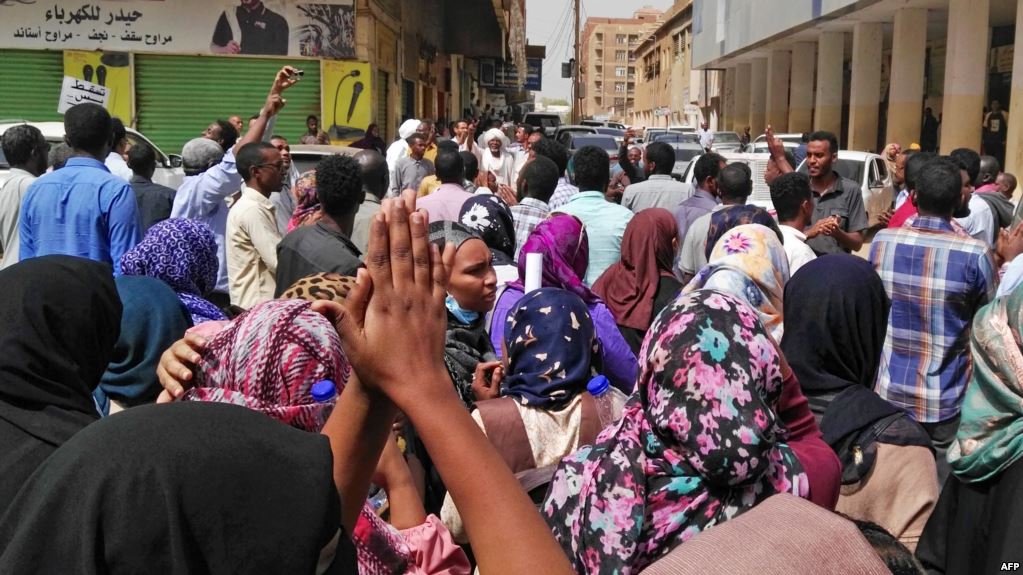 “It is absolutely unacceptable for security forces to use excessive violence to crack down on demonstrators, to use detention without charge, certainly unacceptable to use brutality, torture … and needless to say there’s no reason anyone should be killed,” said Cyril Sartor, senior director for Africa at the U.S. National Security Council.

“We are deeply concerned about the declaration of the national state of emergency and calling the government of Sudan to respect the right of all individuals in Sudan, bringing an immediate end to the violent repression of peaceful protests and seek accountability for those responsible for violation and abuse,” Jonathan Cohen, acting U.S. permanent representative to the U.N., said at a Security Council briefing on the situation in Sudan last week.

In an attempt to end the protest movement, President al-Bashir, who has been in power since 1989, declared a yearlong nationwide state of emergency in late February, while issuing several reform measures.

Since the uprising in mid-December, the Sudanese government has detained hundreds of people, including rights activists, journalists, organizers and ordinary protesters, the rights groups said.

“There are dozens of people who are still in detention even though the government continues to pretend it is releasing everyone. It will announce releases, but it will not actually release everyone,” said Henry of HRW.

Some analysts also charge that al-Bashir’s recent reforms are at best ceremonial and aimed at easing the tensions with ordinary Sudanese.

“These are not measures that can be called reforms,” said Omer Ismail, a senior policy adviser at the Enough Project, a Washington-based research group. “This is a desperate dictator [who] is applying martial law to crush the demonstrations by force.”

“A president who means reform will call his opponents to the table for a constructive dialogue instead of deploying tanks on the streets,” he added.

The deadly crackdown on protesters could also threaten Sudan’s efforts to be removed from the U.S. list of state sponsors of terrorism. The U.S. designated Sudan as a state sponsor of terrorism in 1993.

“We have been quite clear, quite explicit … with all the government leaders that I have met with that the current conditions in Sudan and the overreaction of the security forces in particular put the talks at risk,” Sartor of the NSC said.

In late 2017, the U.S. government lifted economic sanctions on Sudan and also removed the country from the list of countries with travel restrictions.