What does Amuriat’s triumph mean for Muntu?

What does Amuriat’s triumph mean for Muntu?

Amuriat garnered 641 votes, showing a percentage of fifty-one whereas Muntu got 463 votes, representing a 41.7 percentage of the total votes cast.

Seen as fronting Dr.Kizza Besigye ideas, many saw the voting of Amuriat, a close friend to the former, as a triumph of the ideas of extremism and violence popularly termed as defiance within the biggest opposition party.

Speaking to the Nile Post shortly after the polls, Bukonzo West MP, Godfrey Atkins Katusabe described the election of Amuriat as a sad day and the beginning of doom in Uganda’s biggest opposition party and the country at large.

“I can now see a huge split within the Forum for Democratic Change. The party is now more divided than ever and I am seeing the split coming,” Katusabe said.

Almost all FDC MPs rallied behind Gen Muntu in the party presidential polls and among these included the Leader of Opposition, Winnie Kiiza, opposition Chief Whip Ibrahim Ssemujju Nganda and according to Katusabe, the power of legislators cannot be ignored.

He explained that the next few days would mean a lot for the party in regards to FDC MPs who were not supporting Amuriat, the elected party president.

Speaking after being announced winner, the new FDC president said he would meet the FDC MPs soon so as to woo them for support to his leadership.

“I extend an olive branch to you all with a message that FD has won. I urge you to work for the progress of the party,”Amuriat said.

To many, the win by Amuriat, was a clear indicator that the ideas of violence commonly referred to as defiance were the winner on the day at Namboole.

Former Tororo County North, Godfrey Ekanya said the win meant that people had voted to ensure the ideas of defiance continue to flourish.

“POA has been a NEC member and has shown to be a child of the defiance campaign. His win means implementing people’s wishes,” Ekanya said.

Amuriat has for past three months been seen together with Dr Besigye as they battled with police in a number of areas around the country as they continued to front the defiance campaign.

MP Katusabe said the triumph of defiance would not solve anything for the opposition but rather sink them more as they try to acquire the country’s biggest elective office.

“It is the reason I am emphasising that it is a sad day for the FDC and the entire opposition,” Katusabe said.

“Defiance will not take people anywhere. It doesn’t resonate with the rest of the country. It is a headless strategy.”

The legislator said that FDC is so much obsessed with taking power other than organization of the party so as to prepare a safe ground for the future. 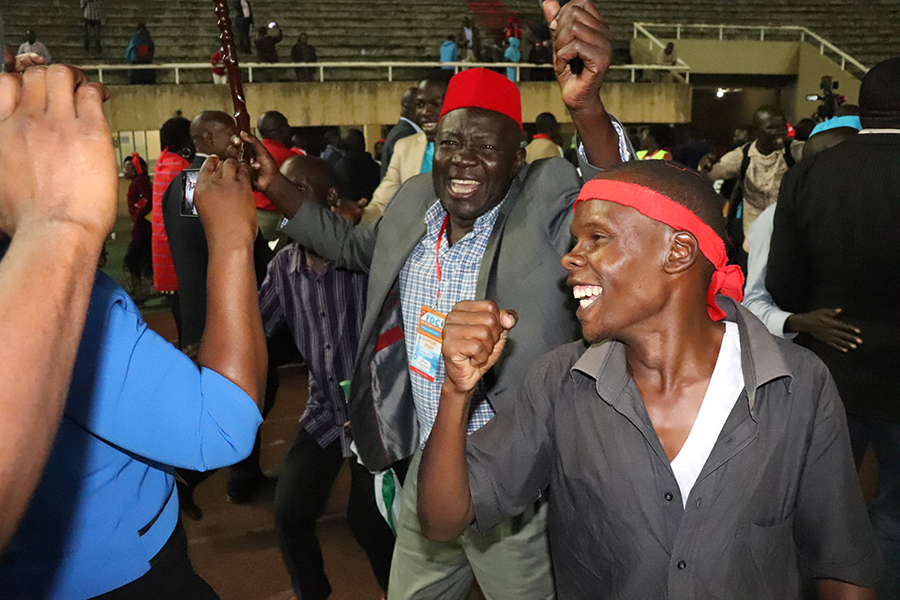 He however said this will not happen in the near future because the group is not yet ripe and prepared   for them to take power.

Former Serere District Woman Member of Parliament, Alice Alaso said that the win by Amuriat meant that the biggest opposition party has now taken a path, none of its founders ever thought of.

“From the start, we registered the party as one that would be confined into the procedures of the political parties act but now we have moved into political activism,” Alaso told this website.

She said that through the years, some of the party members have been advocating for both defiance and moderate means to cause regime change adding that Amuriat’s win meant one side has triumphed over others.

“It is defiance that has won. Some of us will keep quiet and bless the party.”

For Buhweju county MP Francis Mwijukye, the win was not about Amuriat or Muntu but the path the people want to see the opposition party take.

“It was about the approach. The FDC was formed for change and not to be in opposition forever. The win by Amuriat shows FDC supporters are desperately looking for change,” Mwijukye said.

The next few days would mean a lot in the lifeline of the biggest opposition party and Maj Gen Mugisha Muntu.

Speaking shortly after defeat, Muntu warned his supporters about the forthcoming days urging them to resist from being provoked, frustrated and panicking.

He said he would remain focused on the struggle to cause regime change in the country.

The former army commander who has been FDC president for the last five years also hinted at exiting the opposition party adding that there are irreconcilable differences in the party.

“I am an honest man who joined the struggle at 23 years and I don’t intend to backtrack on this but I would like to operate in an environment I feel trusted, “Maj Gen Muntu said.

He said he didn’t have an environment he expected at the FDC headquarters in Najjanankumbi.

“There are decisions I will have to make in the future. “